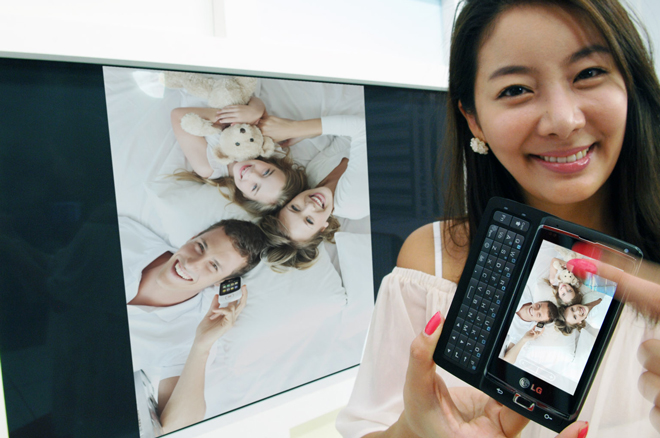 Today, LG introduced a series of high-end smartphones powered by NVIDIA’s dual core Tegra 2 processor. As previously rumored, these Tegra 2 smartphones will be part of LG’s recently announced Optimus line of mobile devices and will start shipping in Q4 2010. The Korean manufacturer does not name the mobile OS powering these upcoming handsets but one candidate for this super-fast treatment will undoubtedly be Android.

The Tegra 2 processor is a powerful SoC with two 1GHz processors designed for mobile usage, 1080P video processing, a low-power NVIDIA GeForce GPU, and more. The introduction of these new Tegra 2 smartphones is very exciting news as the processor promises 2X faster web browsing and 5X faster gaming when compared to the single core 1GHz CPU found in the current generation of smartphones.

We have seen the benchmark results for the Tegra 2-powered Toshiba Folio 100 running Quadrant, an Android-based benchmarking tool, and the dual core device blows its competition out of the water. If you want to watch the Tegra 2 in action, check out of video review of the Toshiba Folio 100 and our earlier hands-on with a prototype Tegra 2 Android tablet.

While LG is the first manufacturer to announce a Tegra 2-powered smartphone, it is not the last. By the end of this year, any manufacturer worth its salt will have one or more dual-core devices in production or possibly even on retail shelves. Let’s hope the Korean manufacturer keeps its wits about itself and does not offer these high-end handsets with an equally high price tag. We have had enough sticker shock from the Samsung Galaxy Tab to last us a while.

Read on for the full press release.

LG First to Announce Smartphone with Dual-Core CPU based on NVIDIA Tegra, the
World’s Most Advanced Mobile Processor

LG will integrate Tegra 2 into its smartphones, providing them with unprecedented power, speed and graphics capability. These smartphones will be part of LG’s Optimus Series, a new line of innovative mobile products.

“LG is committed to making its Optimus Series smart devices the de facto standard in speed and graphics performance,” said Chang Ma, Vice President of Marketing Strategy Team, LG Mobile Communications Company. “We selected NVIDIA because it is the visual computing leader and has a long history of creating amazing consumer experiences.”

“The ultimate smartphones will be powered by Tegra, the world’s most advanced mobile processor,” said Phil Carmack, senior vice president of NVIDIA’s mobile business. “LG is one of the most popular consumer brands, and their Optimus Series of devices with Tegra is further validation of the processor’s ability to deliver an unrivaled, turbocharged media experience.”

LG’s Optimus Series smartphones featuring the NVIDIA Tegra 2 mobile processor will debut starting in the fourth quarter of the year.