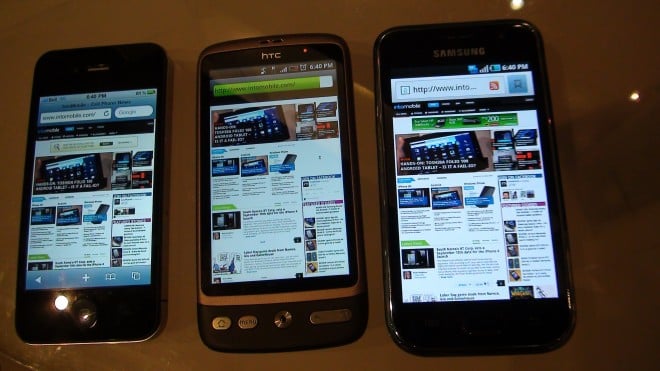 I had some time over the long weekend to swing by the Bell store and compare the Super LCD screen on the HTC Desire to the iPhone 4’s retina display and the Super AMOLED screen on the Samsung Galaxy S Vibrant I9000 (nope, it’s not the Vibrant y’all have in the U.S., but it’s the same screen). We had seen the I9000 take on the Desire before the switch to SLCD, but it’s worth taking a look now that HTC has fully made the switch. Take a look at the video and judge for yourself, but it’s pretty clear that though the HTC Desire gives the iPhone 4 a run for its money, the Retina display still has the lead thanks in no small part to the higher resolution and pixel density. Super AMOLED was sadly left in the dust.

The HTC Desire’s Super LCD screen clocks in at 3.7″ and a 480 x 800 display. HTC had swapped to the technology from AMOLED earlier this summer, citing easier production and better power management while maintaining quality, but also claimed that there were improved viewing angles. The Galaxy S I9000 rocks a  larger 4″ display, but has the same 480 x 800 resolution as the Desire. Super AMOLED has been a feather in Samsung’s cap for awhile, boasting a 180 degree viewing angle, better performance in direct sunlight than its predecessor technology, and providing excellent colour range and saturation. Finally, the iPhone 4’s Retina display is 3.5″ across the diagonal, and has a stunning 960 x 640 resolution. The Retina screen’s resolution is by far the most impressive feat, given the screen’s size. The sheer density produces an incredible sharpness that is just hard to beat… for now.

I didn’t get a chance to test the screens outdoors unfortunately, but hopefully this video will give you a good idea of how each of these smartphone displays compare.

It's nice when marketing on Twitter gets at least somewhat clever, and T-Mobile just got a little creative by tweeting...