The first we saw of the BlackBerry Curve 3G 9300 was a bit of a let-down. It looked pretty much identical to the BlackBerry Curve 8520 and 8530 which had made its first appearance nearly a year earlier; same screen, same camera, same housing, same keyboard. Wi-Fi 802.11n wasn’t a huge deal, and though the 8520 was hurting bad for missing 3G and GPS, the fact that the BlackBerry Curve 8530 came shortly afterwards to fill those gaps meant that besides the added flexibility of running on GSM networks, the 9300 wasn’t that huge of a leap.

That is, until RIM announced the Curve 3G as being compatible with with BlackBerry 6, the new operating system that had launched on the higher-end Torch just a few weeks prior. Though it eventually launched with the same ol’ OS 5 that we had been using for awhile, some forward compatibility gave what would otherwise be considered a low-end entry-level smartphone a doorway into a fresh and modern operating system. The BlackBerry Torch 9800 largely failed to impress as its moderate OS enhancements still couldn’t quite keep up with the upper end of the smartphone market, but for lower-end smartphones, universal search and a nicer user interface could set a new baseline standard for BlackBerry. The Curve 3G is now out across Canada, and available today on T-Mobile, but can it stand on its own well enough (and long enough) until OS 6 comes around? 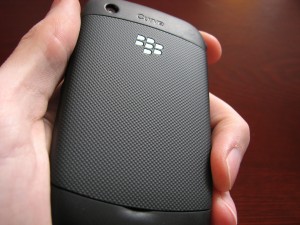 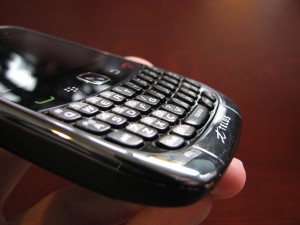 The hardware is largely unchanged since the BlackBerry Curve 8520 and 8530. The bezel is shinier, and the battery door has a new pattern for extra grip, but the unified, rubberized side keys, top-mounted media controls, and solid unibody plastic construction are all the same. The keyboard, as always, is very comfortable to use, if a little on the clicky side; take note if you’re prone to using your phone in bed while significant others are trying to sleep.

Ditching the separators between the Menu/Call and Back/Hang Up keys definitely gives the BlackBerry Curve 3G 9300 a more unified style not dissimilar to the the BlackBerry Storm 2. As for feel, the grip is exceptional, and gives a sense that it’s sturdy enough to weather the test of time. I’d be a little worried about scratching the plastic screen, but that’s fixed easily enough with an inexpensive protector. The BlackBerry Curve 3G 9300 launched with OS 5.0.0.832, which, again, is a calibre of software that’s available on the older 8520 and 8530.  You can take a look at all of the improvements in OS 5 over here, but the main ones are very enterprise-minded: e-mail flags, Calendar meeting attachments, distribution lists in contacts, and message folder syncing with the BlackBerry Enterprise Server. There are some minor UI updates as well, along with added media options, like a dedicated folder containing each app, and a visual memory management section.

In a more general sense, the BlackBerry experience on the 9300 is pretty much unchanged; menus can get a little long, but are intelligent about jumping to common tasks when you open them, shortcut keys can make life much easier once you learn them, and the application market, though occupied by some quality dedicated players, lacks the variety and richness of iPhone or Android. The introduction of $0.99 and $1.99 pricing tiers has made software a little more accessible in App World, and will hopefully spur some stiffer competition between developers, but it hasn’t quite kicked in yet. The native Messages application remains a well-oiled machine for taking in and pumping out messages to a variety outlets; phone, texting, e-mail, instant messaging, and social networks are all well-integrated and streamed through the single channel, which is excellent for those who handle a wide variety of communications, especially when those communications are either time dependent or high in volume.

The full value of the BlackBerry Curve 3G 9300 will be unlocked once OS 6 becomes available on it, offering not only a whole new look, but also the extremely well-done universal search. Take a look at our BlackBerry Torch 9800 review for a better feel for what OS 6 has to offer. Until the update shows up, the old operating system is certainly passable, and even once you can get OS 6 on the Curve 3G, the real functional differences will be minor. The native BlackBerry browser hasn’t been especially good for a long time, and even with an upgrade to OS 6, the lack of multitouch zooming, lower-end screen resolution, and continuing lag in load times in the WebKit browser mean the situation probably won’t improve in time. Of course, the browser works in a strictly utilitarian sense, but don’t expect it to be a joy to use. Load times are sluggish, and JavaScript handling can slow things down even more.  If you only have a few favourite web destinations that have mobile-friendly sites, it shouldn’t be much of a problem, and if you’re looking for smoother full-web browsing, it’s worth looking into Opera Mini for BlackBerry (although I found the cursor inexplicably jumpy when loaded on the 9300). 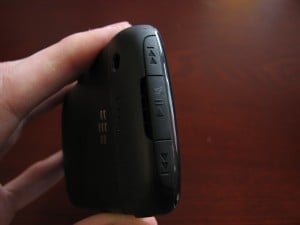 The top-mounted media controls clearly label the BlackBerry Curve 3G 9300 as a media-savvy phone, and though they are handy, I do have one niggling design problem. Usually, BlackBerrys lock by holding down the A key, then unlock by hitting A and Call, but with the Curve 3G (and the 8520 for that matter), the pause/play/mute button on top also unlocks the phone. This can be bad news when you’re not sure if you locked your phone or the screen just timed out and turned off, because you can easily end up bleating some music from your phone when you just wanted to unlock it. The media keys certainly look good, and let people know right away that BlackBerry is a capable music player, but I think it functions just as well (if not better) when BlackBerrys have mute and lock keys on top and users can skip tracks by holding down the volume keys.

Music aside, video and image quality naturally suffer because of the QVGA display. Again, the screen is entirely functional, but as a budget phone, don’t be too eager to put the Curve 3G next to your friend’s iPhone 4.

It was a bit startling that RIM actually downgraded their camera when they launched the 8520, considering they were already lagging behind the camera game, but as a cost-saving measure, I could see why their entry-level BlackBerrys have 2 megapixel cameras with a fixed focus and no flash. The lack of camera flash can be offset slightly by changing the white balance to Night (as done below), but don’t expect to do much more than basic photography on this thing. 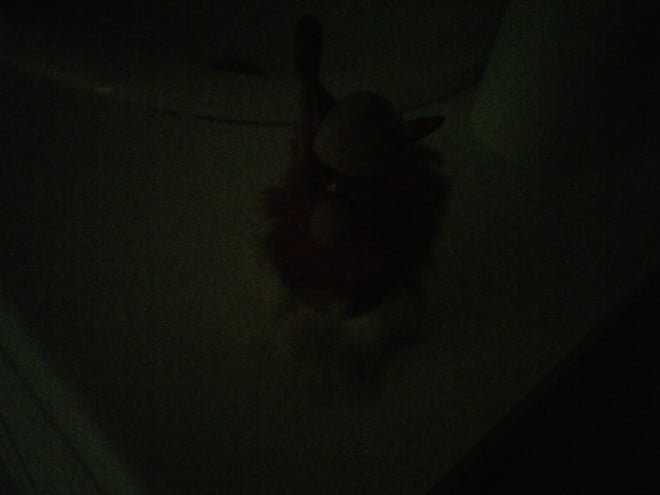 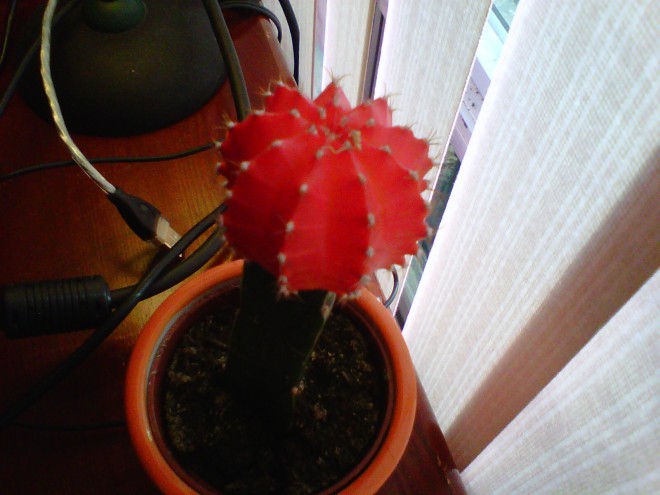 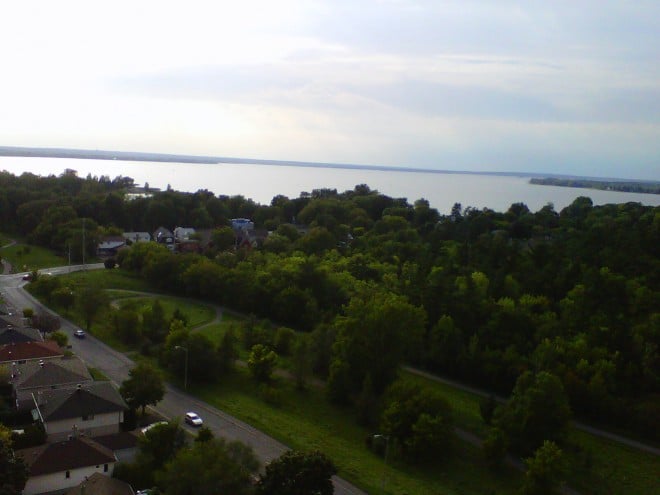 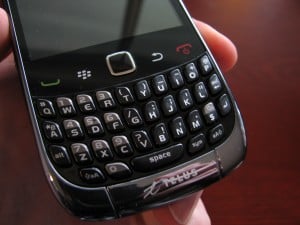 I found the speaker sound was a little hollow during calls, but the phone otherwise held a connection just fine. Battery life is decent, and got through a day of moderate use without any worries. You’d need to bring the screen brightness down and turn off Wi-Fi to make sure you get through a busy day, and there’s always the option to drop to 2G if it comes down to the wire.

Picking up the BlackBerry Curve 3G 9300 will be a choice that boils down more to carriers than the device itself. If for whatever reason you’re not on a CDMA network, the 9300 will be a significant enough change from the 8520 to be worth considering if you had looked at and passed on the 8520. For those on Verizon, the 9330 arriving later this month will look an awful lot like the 8530, in that it already had GPS and 3G, leaving OS 6 compatibility as the only new feature. Regardless of network, the 9300 series will subtly replace the 8500s currently on shelves, and customers will probably not notice the difference.

As an entry-level smartphone, it fares extremely well, handling all of the same functions as a higher-end BlackBerry without the frills of a nicer camera or higher-resolution screen. It would be unfair to pit the 9300 against the toughest Android competition available right now since it’s not punching at that weight, but at least on T-Mobile, you could get the Cliq XT or Behold II for just a little bit more ($10 and $20 more, respectively), both of which have HVGA screens, 5 megapixel cameras, and a healthy selection of apps in the Android Market.  That will be enough to win over more casual users, but I would still recommend the Curve 3G 9300 to those who are hardcore about their messaging, and are looking for a smartphone on the cheap. OS 6 will be a nice facelift, but I wouldn’t hinge a purchasing decision on the update.