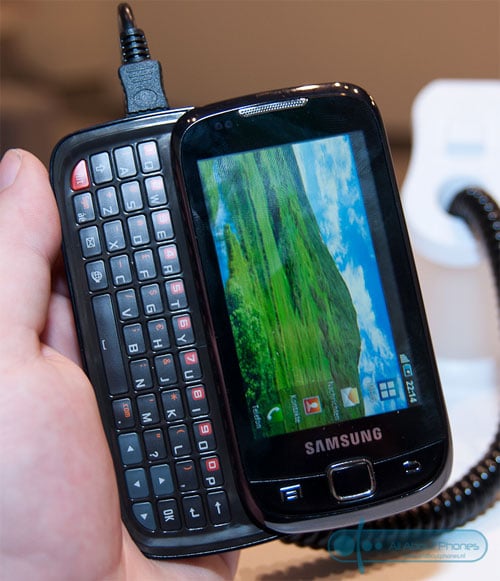 Here’s one phone we’ll be talking about in the next few weeks. It’s the “still not officially announced” Samsung I5510, which was caught at this year’s IFA in Berlin, Germany. From what we can tell, it’s not as bad-ass as the Galaxy S Pro, but since it will be more affordable (once released), I’ve no doubts it will fly off the shelves in record amount of time.

Aside from rocking the ever-useful side-sliding QWERTY keyboard, this baby packs a 5-megapixel camera, HSPA and WiFi data, Bluetooth 3.0 and a microSD memory card slot. Android 2.2 is running the show with (most likely) TouchWIZ UI on top of it.

All in all, the Samsung I5510 is a solid mid-ranger that will definitely find its place in top tier carriers’ portfolios.

Unfortunately, we’ve no information on availability nor pricing. We’ll keep our ears on the street and as soon as something new comes up, we’ll blog about it…

Cricket: Samsung Messager Touch: QWERTY has never been so cheap, so feature packed

Mobile phones with QWERTY keyboards are not going away anytime soon, regardless of how fast you think you can type...