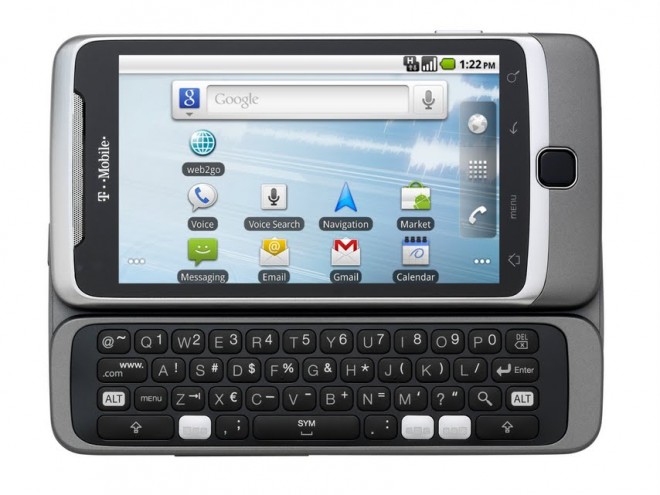 We know that the T-Mobile G2 was officially announced last night but the pricing and release details were only spoken about in vagaries. Best Buy has come to the rescue though, as the retail giant said the Android superphone will hit its shelves Oct. 6 for about $200 with a new, two-year contract.

That’s about the price one expects from a top-tier smartphone with a carrier subsidy but remember that purchasing from Best Buy also means that you won’t have to worry about mail-in rebates. You can go into a Best Buy store and preorder the T-Mobile G2 Android phone starting this Friday.

What’s all the fuss about? Well, the T-Mobile G2 is the sequel to the world’s first Android phone and it looks like a stellar evolution of the line. If I’m being nice, I’d say the G1 had a “unique” look but the thing was kind of chunky and ugly. That doesn’t appear to be a problem with the T-Mobile G2, as HTC has included a swivel-out full QWERTY keyboard which looks pretty nice and gives it a relatively slim profile.

Some may be disappointed that the T-Mobile G2 only has an 800 MHz processor while other top-shelf smartphones like a Droid X and EVO 4G sport a 1 GHz Snapdragon CPU but some benchmark testing we’ve seen indicates the G2 should perform at a high level. Android fans will be happy to know that it appears that this will be a stock Android phone, as there won’t be any custom user interface layered on top.

The T-Mobile G2 has the advantage of being the first HSPA+ phone, so the Android device will be able to get up to 21 Mbps download speeds. That’s a theoretical limit of course, but I wouldn’t be surprised to see more than 10 Mbps in areas where T-Mobile has HSPA+ 3G coverage.

So, are you excited about the G2 or is just another phone with Google’s OS?

The mobile security firm Lookout said it now has over 2 million registered users and shared some interesting data about...