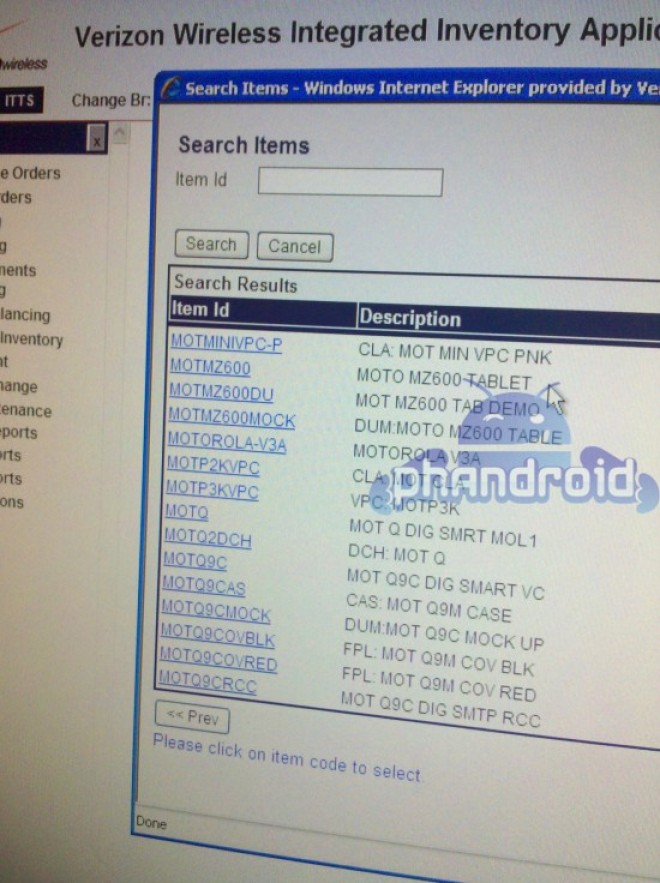 The Motorola tablet we’ve been hearing about for some time now has now shown off that MZ600 model number again in Verizon’s inventory system. With a predicted launch for sometime this holiday season, we wouldn’t be so surprised if more leaks are on the way.

The tablet, which may be codenamed Stingray may indeed be the first real challenger to the iPad. We’re not saying that the Samsung Galaxy Tab isn’t a decent competitor, but with the rumblings of a FiOS-enabled,Android Gingerbread tablet, the Stingray may have quite a few things to be desired that the competition lacks. Motorola has been winning the hearts of Verizon customers with their Android handsets and we’d expect them to deliver a solid Android tablet.

We still don’t know exactly what Gingerbread will bring us, but we have some guesses. I’ll refrain from calling Gingerbread Android 3.0 on possibility that it may indeed be an incremental update, and Honeycomb may actually be 3.0.

Nonetheless, Gingerbread running on a Tegra2-based tablet from Motorola sounds good enough for us and there’s little doubt that it will see future updates. Though HTC may still be considered the king of Android, it was the Motorola Droid that really put Android on the map. HTC has definitely brought out the big guns with the Droid Incredible, EVO 4G and the upcoming T-Mobile G2, but Motorola has gone all in with Android and it shows.

What we don’t want to see on this tablet is some sort of custom skin. If Gingerbread is focusing on user experience and is supposed to make custom skins useless, we’d be sad to see Motorola throw the “just OK” refined version of Motoblur we’ve seen on the Droid X and Droid 2.

HTC has come out and said that their Sense UI will remain on their upcoming phones, regardless of what Gingerbread brings to the tablet. We’re hoping that Motorola doesn’t agree with that one. While we don’t believe that the tablet will come with a skin on top, since Google has a personal hand in the making of it, anything is possible.

We may not have much longer to find out what Motorola plans to bring us, but rest assured, it’s going to be good.

If you're a fan of the HTC Desire with Android, you're undoubtedly holding your breath for the HD version. It...