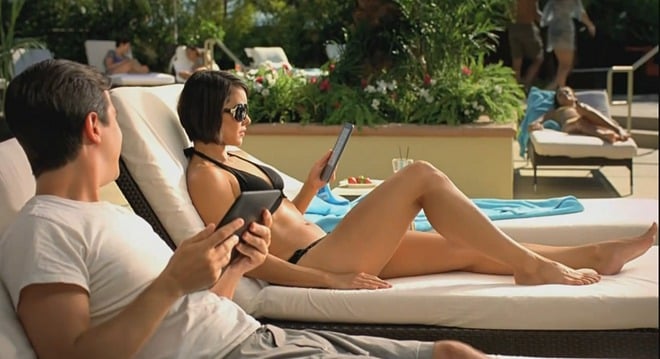 There’s no doubt that the Amazon Kindle is one popular and terrific reading device. And in many ways, the Apple iPad isn’t so bad either. After all, the latter does support the Kindle app, as well as iBooks and the Barnes & Noble Nook app. However, the reading experience on it hasn’t been all that great: it’s either too bright when you’re reading at night, even on its lowest brightness setting, and when you’re in direct sunlight, the glare and reflection is an annoyance.

Now that the Kindle is handsomely priced at just $139, whereas the cheapest iPad you can get is still $499 (16GB Wi-Fi only model), Amazon has decided to take it to Apple right where it hurts. But is the glare-free screen really enough of a deal breaker if you’re considering the two?

First of all, we’re comparing apples to oranges here. The iPad, of which over 4 million units have been sold to date, is a tablet computer. You can play games, it supports multi-touch, web-browsing is a decent experience and it handles e-mail and supports over 25,000 dedicated applications. The Kindle, on the other hand, is primarily an eReader.

The choice between the two really depends on what you want. Do you want a rockin’ eBook reader that isn’t heavy and cumbersome? Or do you want a multimedia device that allows you to watch your Netflix videos and play Grand Theft Auto: Chinatown Wars HD?

Depending on your needs, however, you really can’t go wrong with either device. If you’re not much of a tablet reader, favoring reading on paper over anything with a screen, the iPad is a great choice. However, if you’re just a bibliophile who can’t get enough books under your belt, you’d do well to grab the Kindle – especially since it has access to over 670,000 titles in the U.S.

Of course, you could just get an anti-glare screen protector – which Amazon sells, ironically – for your iPad and have the best of both worlds.

Check out the video below where the smoldering hot woman enjoys her Kindle while the clunky dude tries to figure out how to read on his glare-stricken iPad: