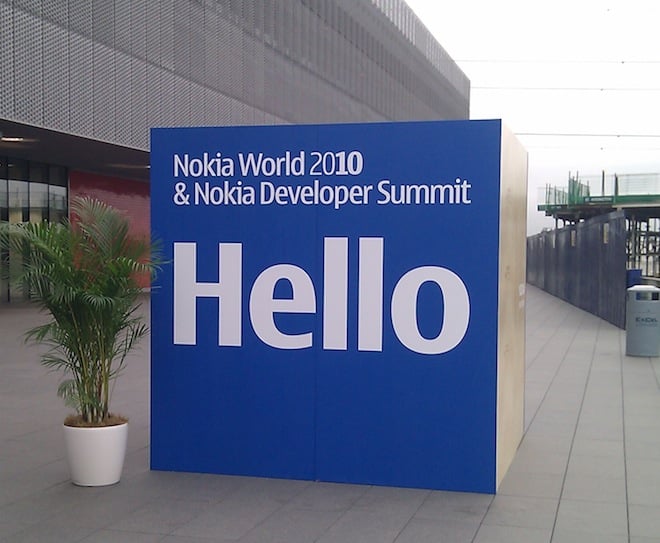 Nokia World 2010 is alive and well, and VP Niklas Savander wasted no time in talking up the brand as well as taking unrelenting jabs at Apple and Google. According to Savander, Nokia sold 260,000 phones per day during the summer, and he says that those figures are more than the iPhone and Android handsets combined. On top of that, the new N8 is allegedly poised to move over 50 million devices during its lifetime. Whoa, hold your horses!

First, let’s start with the claims against Apple. According to Steve Jobs, his company has seen 230,000 iOS activations per day. Even if  a small chunk of those numbers are iPad and iPod units, a good majority of those activations are the iPhone. Next, we have Google and Android. In response to Apple’s claims against Android, Google says that it sees 200,000 activations per day not including upgrades or updates. And we know that those figures are largely smartphones.

Even if we were to take 70% of Apple iOS and Google Android activations combined, which is a conservative number just to rule out tablets and music players, it would still be greater than Savander’s claim of outselling Google and Apple combined.

Despite the error, Savander was confident enough to attack both rivals. He accused Apple’s Scott Forstall of copying Nokia’s “connecting people” slogan in the promo video for the iPhone 4 and said the slogan wasn’t just a “feel-good tagline” for his company but “our mission, our passion.” The VP went on to take a potshot at the iPhone 4 antenna by claiming the N8 and other smartphones would always perform “no matter how you hold them.”

Perhaps that confidence is misplaced, as it seems almost petty to attack Apple for “copying” Nokia’s slogan and really taking offense to it. And while Nokia can make fun of Apple’s iPhone 4 antenna all it wants, Apple’s value share will continue to dwarf Nokia’s as well as all other smartphone manufacturers combined.

Lastly, one has to look past all these numbers and figures being thrown out and look at the products themselves. Sure, Nokia might be selling hundreds of thousands of phones per day worldwide, but just how many of those are smartphones with the same caliber as Android and the iPhone? Is Nokia including sales figures from dinky little candybar phones that use Symbian, calling it a smartphone, in its numbers against Apple and Google who sell primarily high-end smartphones? And what can we take away from Symbian’s market share decline as iOS and Android battle it out for the top spot?

Nokia really needs get its act together. If it wants to attack Apple and Google where it hurts, it’s going to take a lot more than picking on issues that are months old and crying about copied slogans. Here’s a start: why not improve U.S. carrier relations and get those smartphones, like the N8, subsidized here in the States? Nokia’s lack of serious presence in the U.S. isn’t going to help its bottom line and it can’t rest on its global laurels forever.

Hands-on: Nokia E7 – The Symbian^3 successor to the 9000 Communicator

If you ever thought to yourself that you'd love to see Nokia produce a successor to the brick-sized Nokia 9000...