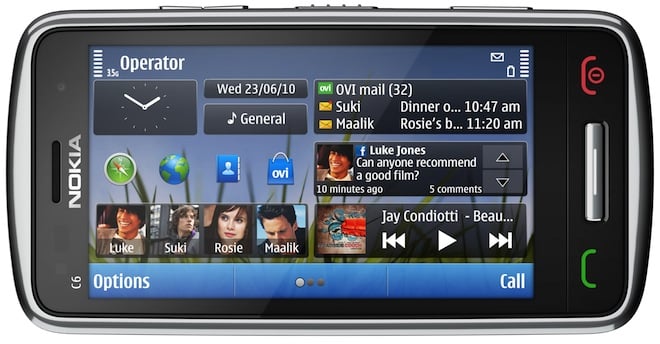 While watching Anssi Vanjoki introduce 3 new devices at Nokia World today, I had a Skype chat window open and one of the first things ex-blogger Ricky Cadden said when the C6-01 was revealed was “wtf, isn’t the C6 already out?” That pretty much sums up this device. It’s the C6 that was launched during the summer, but without the keyboard, and a newer operating system. You can think of it as a successor to the Nokia 5800. It has a 3.2 inch touch screen with a resolution of 640 x 360 pixels, it is a gigantic 13.9 mm thick, 103.8 mm tall and 52.5 mm wide, and it comes in a 131 gram package. That sounds confusing since the Nokia C7, one of the 3 devices I alluded to earlier, has a larger 3.5 inch screen, yet comes in at only 130 grams.

The tiny 1050 mAh battery claims to provide 11.5 hours of talk time and 17 days of standby time if you turn off the 3G. With a screen that small, I wouldn’t have expected anything else. I’m starting to wonder why there aren’t any Android devices that are in this size category. Nokia is going after people who want small smartphones with the C6-01, because just like there are people who want something insane like the 4 inch Nokia E7 or even larger Motorola Droid, there are also others who want something that doesn’t look like they’re smuggling a pistol around town.