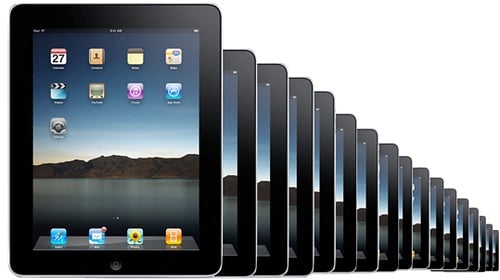 In a Wall Street Journal article, Best Buy’s CEO dropped the shocking statistic that the iPad is cannibalizing sales of notebook PCs by as much as 50%. Though this figure is exceptionally high, this idea has bounced around since Apple’s tablet device debuted back in March. Since that “magical” day, people have been combing through survey numbers and sales figures looking for signs that the iPad’s popularity is affecting the sales of competing electronic devices.

Initial signs of rising iPad interest began appearing as early as May when a survey by Retrevo revealed that 30% of netbook shoppers chose the Apple’s tablet device  over a netbook. More recently, Asus confirmed that it has reduced netbook shipments in response to decreased demand and weakening netbook sales. Asus CEO Jerry Shen cited the iPad as the reason for this decline. Analysts left and right have also suggested that the Apple tablet is stealing sales from comparatively priced notebooks and PCs. Customers looking for new hardware in the $500 price range are choosing to keep their existing PC or Mac and are spending that money on a shiny new iPad instead.

While several analysts have noted that the iPad is stealing sales from the traditional notebook market, this Best Buy admission is significant as it is one of the first to suggest the Apple’s iOS-powered tablet is affecting traditional notebooks sales in a big way. A 50% decline in sales from one of the nation’s largest consumer electronics chains is a considerable reduction. Best Buy is apparently putting its money where its mouth is and is expanding the iPad to all of its 1,093 stores starting September 26th.

Now is the time to confess, have you or will you contribute to this cannibalization by purchasing an iPad as a supplement to your desktop and laptop?

[Via the Wall Street Journal]