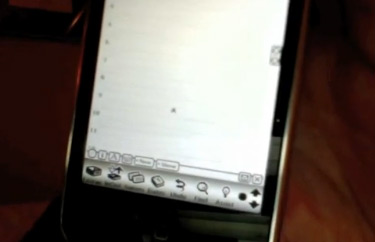 Remember the good ‘ol Apple Newton? Some would argue it was produced well ahead of it’s time… others would argue it was just a plain old flop. Whatever your take is on the early PDA from Apple, one can’t help but feel nostalgic about it… especially if you pack an iPhone, run a MacBook Pro, or have an old Apple IIe in the basement. The thing screams retro-cool.

With that in mind, I came across a little bit of Apple retro goodness last night while doing some surfing. The good folks at TUAW posted the video you’re about to see below. It details the Einstein Emulator running Newton OS (albeit a little slow) on an iPhone 4. Yes! How’ve you been Newton OS? Great to see you! 🙂

A giant *tip of the cap* has to go to developer Matthias Melcher for this one. A *firm handshake* goes out to Paul Guyot for putting the Einstein emulator together. It’s uses like this that make me (and no doubt many others) smile. Now, if Matthias can get Newton OS to run a little bit quicker on the device… then we’re talkin’. Check out the video below, and enjoy!

Award-Winning Dr. Seuss Apps 50% Off for a Limited Time

If you dig all of those classic children's stories from the one and only Dr. Seuss, the good folks at...