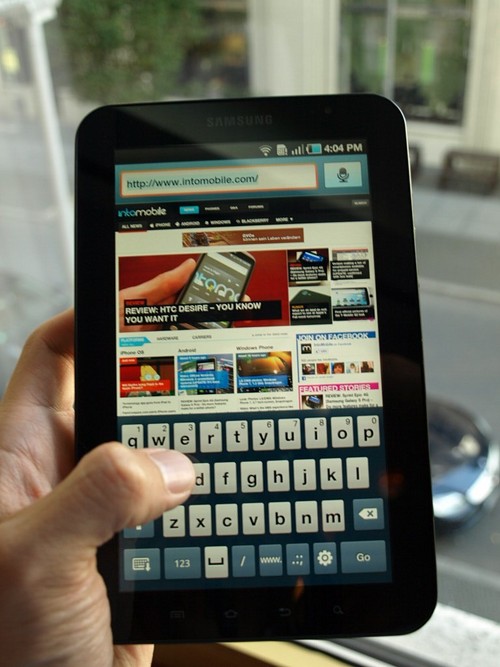 Surprise! It looks like the Samsung Galaxy Tab, which will be running the tablet-incompatible Android 2.2, or Froyo, OS, might have some issues with applications. Samsung already mentioned that some applications and features have been optimized for the 7-inch display tablet experience, so those of you waiting for the Galaxy Tab should know what you’re in for.

Have you ever used an iOS app for the iPad that wasn’t an “HD” version, or one that was optimized for the Apple tablet? It looks hideous when you blow it up to full screen, right? And using the app within the black box (i.e. using the app as it was designed to be used with the iPhone) makes it almost seem pointless. Well, that full screen experience is going to be similar to what we’ll see on the Samsung Galaxy Tab.

There is a reason that some Android tablets don’t have access to the Android Market. Some of those apps would look absolutely hideous on a huge screen, and the Galaxy Tab is no exception. Although the 7-inch display isn’t as big of a jump from the 3.7-4.3-inch displays we’ve been seeing these days, the quality degradation will be noticeable.

Analyst Rob Enderle of Enderle Group says, “Apps aren’t going to scale right and won’t be quite as pretty. The apps are probably going to be a little ugly.”

Android is an open platform. We saw at IFA 2010 all sorts of devices running Android, so it already running on tablets. But the way Android Market works is it’s not going to be available on devices that don’t allow applications to run correctly. Which devices do, and which don’t will be unit specific, but Froyo is not optimised for use on tablets.

The Samsung Galaxy Tab will probably offer a pretty good reading, web browsing and video/multimedia experience, which might be good enough for some. Hell, it will even support video chatting – a feature which the Apple iPad sorely lacks. But if you’re looking for a decent experience with Android applications, you’ll probably have to wait until Android developers start designing or optimizing apps for the tablet market.

If you’re in the market for a tablet device, and you’re trying to choose between Android or iOS, be sure to take our Apple iPad vs. Samsung Galaxy Tab survey!

Game of the Day: Rubik’s Cube for BlackBerry

Growing up in the eighties as I did, I'm no stranger to the puzzling frustration of the Rubik's Cube. In...