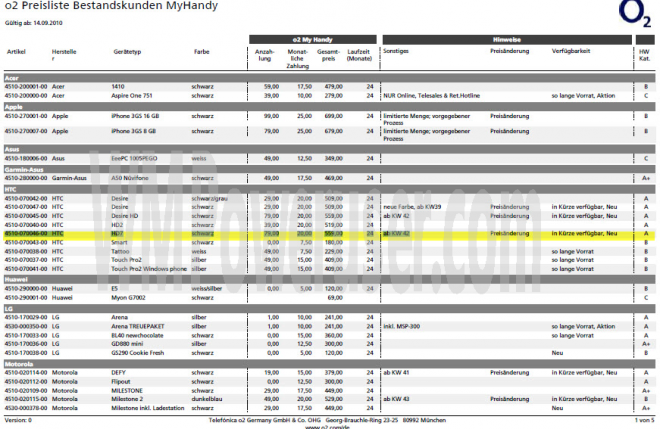 The rumored Windows Phone 7 HTC HD7 has made another appearance in the inventory list of a major wireless carrier. Previously spotted at Vodafone and T-Mobile USA, the HD7 now makes its debut in the inventory of O2 Germany. This latest O2 leak hints at a launch during week 42, which coincides with the October 18th launch date suggested by the original Vodafone leak. It is also a few weeks earlier than the November date pegged in the T-Mobile USA accessory list that hit the rumor mill last week. All three of these dates fit in perfectly with Microsoft’s projected launch schedule for Windows Phone 7 which has WP7 handsets landing in October at European carriers and in November with US carriers.

Details on the HD7 handset are sparse but it is thought to be the successor to the HTC HD2, the last major handset released with the now defunct Windows Mobile operating system. Given its HD7 moniker, the handset is expected to run Windows Phone 7, Microsoft’s latest mobile operating system. Unlike the Windows Phone 7 Samsung Cetus which has been spotted on multiple occasions, the HD7 has not been spotted in the wild. The only other detail that emerged from this O2 Germany leak is the pricing which is listed as €79 ($103 USD) with a two-year agreement, and a €20 ($26 USD) monthly tariff. It will also be available for  €559 ($729 USD) without a commitment. When assessing the pricing and availability of  this handset, remember that these dates and dollar figures are tentative and subject to change before launch.

The feature list for BlackBerry Internet Service 3.2 had leaked earlier over the summer, revealing some pretty solid new features,...