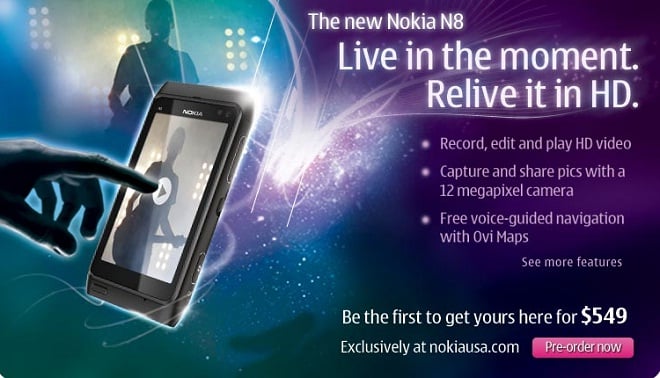 If you were hoping to get your grubby hands on that Nokia N8 at the end of the month, then you’re out of luck because the world’s largest handset maker has delayed its flagship device for a few weeks.

According to a statement obtained by Engadget:

The amount of preorders has exceeded our expectations and we are working hard to deliver the Nokia N8 to the market. In some markets, we had planned to start delivering the Nokia N8s to our pre-order customers by the end of September. To ensure a great user experience, we have decided to hold the shipments for a few weeks to do some final amends. We’re thrilled with the response that we’ve had to the Nokia N8 and assure everyone who’ve pre-ordered it already that it’ll be worth the wait! We expect consumers to get their Nokia N8s during October.”

That’s kind of a shame because the N8 looks pretty darn cool. It has an all glass capacitive screen and from the brief hands-on time we had with it, it finally appears that Nokia gets touch input. It also sports a 12-megapixel camera that should be high quality, as well as all the high-end features you’d expect like WiFi, GPS, Bluetooth, 3G (for AT&T and T-Mobile) and more.

Unfortunately, it doesn’t look like the software is going to be up to snuff. This runs Symbian^3 and we found it to be a bit sluggish when compared to its competitors. It is fully featured though, but it lacks the polish of an iOS or Android.

It’s going to be difficult for the Nokia N8 to find success in the United States, as the device is currently being sold unlocked for about $550. We should be getting our review unit soon, so keep it locked here for a full review of the N8.

AT&T has just unveiled its prepaid mobile data plans for its netbooks and laptops. While I'm not a big fan...