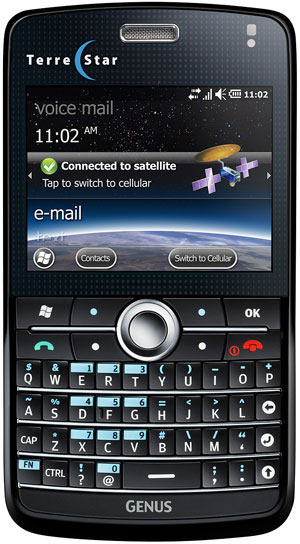 The hardware might seem a little old, but for emergency and remote workers, voice, data, and messaging capabilities through a secondary satellite connection to anywhere with an open view to the southern sky will be enough of a selling point. Even though it looks like the TerreStar Genus breaks the mold of satellite phones with ridiculously huge antennae by having a standard smartphone candybar form factor, AT&T is quick to remind us that an external antenna (which costs extra) may be required in secondary coverage areas.

Considering TerreStar had to launch their own satellite in order to make this handset happen, it’s a pretty interesting development in smartphones. Maybe now that the way has been paved with the Genus, we’ll see some more consumer grade satellite smartphones geared for folks who are simply in remote locations outside of coverage from the big networks. Of course, pricing will be atrocious for the first little while, but once that satellite’s paid off, maybe some affordable consumer-level plans will be offered.

You can find out more about AT&T’s satellite solutions here, or find an enterprise rep to talk about sales here. Pricing is apparently around $799 for the device.