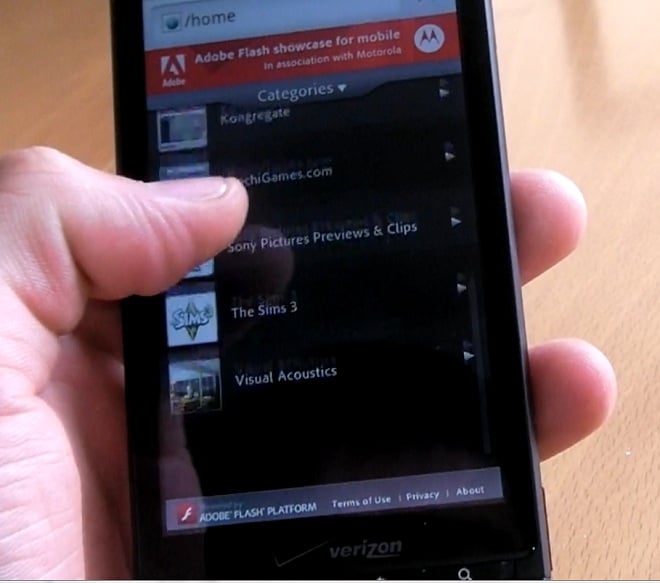 The magical fairies dropped off a Motorola Droid X with Android 2.2 on it and a near-final build of the Adobe Flash Player 10.1 and you know we had to show if off to you dear readers.

We all know that Flash is a contentious issue in the smartphone space thanks to Apple’s belief that it is not appropriate for mobile devices. In particular, Apple believes Flash is too resource intensive and the content hasn’t been optimized for touch interfaces.

The Adobe Flash Player 10.1 has hit multiple devices with Android 2.2 but I wasn’t in love with the performance on the Droid because I didn’t think the hardware was capable of high-quality performance. With a 1 GHz TI OMAP processor, the Droid X is ready to rumble and it shows in the video below.

I tooled around on the Flash-optimized sites Adobe likes to show off and it works really well for the most part. Videos play in-line with little buffering or stuttering and Flash games from Kongregate work and some even have full-screen modes that work with the phone’s accelerometer.

One of the major ways I use Flash on the web is to listen to podcasts on webpages without having to download the file. This works pretty well on the Android handset with a few quirks. First of all, playback will stop if you scroll off the part of the page with the player or if you open a new tab. It’s the same with videos, as the company did this to minimize resource drain – it can be a little annoying but it’s a minor thing. Luckily, you can play these files with the screen locked too.

Still, don’t expect a full desktop Flash experience on your Motorola Droid X, as some of the HD video content won’t work on your device. That’s more of a transcoding issue on the publisher’s side than an Adobe problem.

In fact, that brings up the larger issue about Flash on Android and the move toward HTML5 by some publications: it doesn’t matter if you use Flash or some other technology for your site, as you have to optimize the experience for a mobile phone or else it just doesn’t feel right. This includes acclerometer support, rethinking a navigation layout and working on the touch interface.

So, the bottom line is that Adobe Flash for the Motorola Droid X is a really good experience for the most part but publishers, Adobe and Google need to continue to work on it to make it a great experience. Will they be able to do this before HMTL5 takes over? That, friends, is a question we’ll be trying to answer for years.