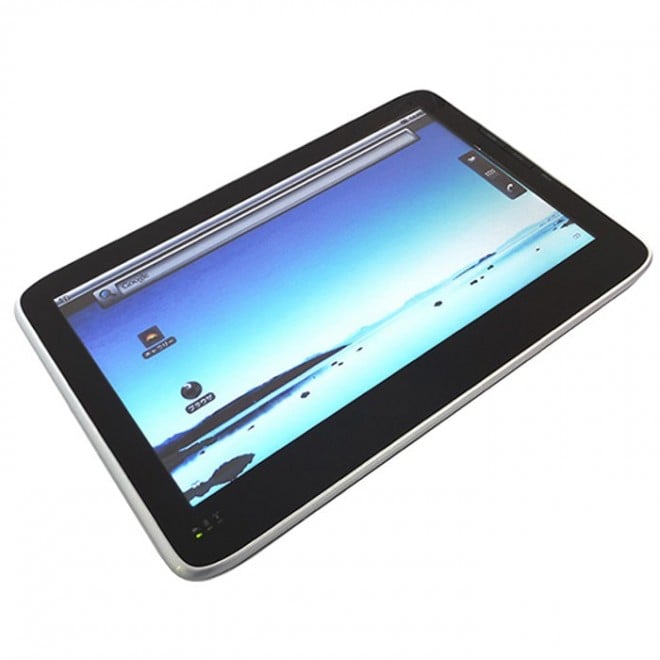 Another day, another Android tablet, but this one isn’t your everyday Kmart Android tablet. The LuvPad AD100 sports some great specs and is an interesting option for those of you considering an alternative to the iPad. Brought to us by Mouse Computer, the LuvPad is probably one of the best Android tablets we’ve seen that’s already available.

With a 10-inch LED TFT display (1024 x 600 resolution), the LuvPad is roomy enough for those looking for a large tablet. We’re glad they didn’t just slap on a resistive screen on this, as most of the appeal would be gone. The LuvPad also sports stock Android 2.2 Froyo from the looks of it, and has the NVIDIA Tegra 250 (Tegra 2) on-board as well. It will officially launch later this month, and the good news is that this tablet isn’t going to break the bank. It runs about Japan for 39,800 yen, or about $466. For those of you not in Japan, GeekStuff4U is offering up the LuvPad for ¥48,250, or about $571, and is available for pre-order.

The LuvPad also comes with 8GBs of internal memory, but you can always beef it up with a MicroSD card. The tablet sports a now-standard amount of RAM, 512MB, which should be just fine for most tasks. But if you’re anything like us, more power and RAM is always better. The tablet is WiFi-only, with no word on an upcoming 3G version. If we were to find one drawback on the tablet, it’s  that the LuvPad weighs over 1.5 lbs. It weighs 1.67 lbs to get specific.

The LuvPad is definitely one of the nicest Android tablets we’ve seen in a while when it comes to specifications. We’ve been waiting for some NVIDIA lovin on some of these tablets, and it seems as we have one at a reasonable price for what you’re getting.

As excited as I am for a tablet purchase, I think I’ll be waiting it out until early next year. At that point, there will be more options, and many other anticipated tablets should be out at that point as well.

If you’re ready to pre-order the LuvPad, hit up this link!

RIM could be prepping 2.5 million BlackPads for this year

Research In Motion is supposedly preparing to make 2.5 million BlackBerry tablets, or BlackPads, for the fourth quarter of this...