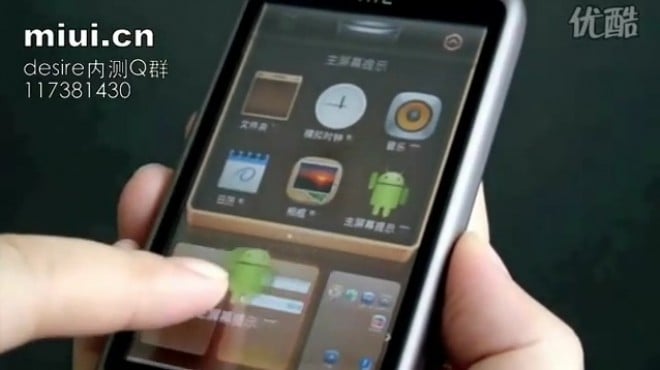 There’s been plenty of custom ROMs out for the Nexus One for some time now but you’ve likely never seen something like this before. The MIUI ROM, brought to you by some awesome Chinese Android developers, is a Froyo-based ROM that looks like a mix between iOS and Android with some nice customizations.

Almost everything on the MIUI ROM has been completely customized – From the lock screen to folders, to the absence of an application drawer, the ROM is a completely new experience. MIUI has been causing quite a bit of buzz in the developer and modder community, with good reason. The ROM was basically built from scratch from the looks of it, and for the most part is in Chinese, so you may need to brush up on your kanji before you go ahead and flash this thing. That said, it’s close enough to an Android experience you’d expect, so if you’re familiar with Android, you’ll likely find your way around the ROM just fine.

One of the cool features of MIUI is the way you add widgets to your home screens. Instead of the standard list you’d expect to see, you’re presented with a small box that takes up half of the screen showing you the widgets available to you, with the other half showing you the existing widgets on your home screens. Each widget you can choose from will show you how much of the screen it will take up with a small graphic. You simply drag the widget you want on the desired screen, and you’re good to go. It’s nothing that will take your breath away, but it’s a different take that some of you complete geeks modders may appreciate.

The MIUI ROM is available for the Nexus One, HTC Desire, and EVO 4G. I haven’t got a chance to personally test it, so I can’t say anything about its stability. Judging by the two videos below, it’s very snappy and despite some of the Chinese writing, it looks like it’s ready for daily use.

If you’re running MIUI, how do you like it? Is  it a keeper?

Check out the videos below, the first is an overview, and the second goes into more detail.

Verizon confirmed the launch details for the R2-D2 edition of the Motorola DROID 2. The Star Wars branded handset will...