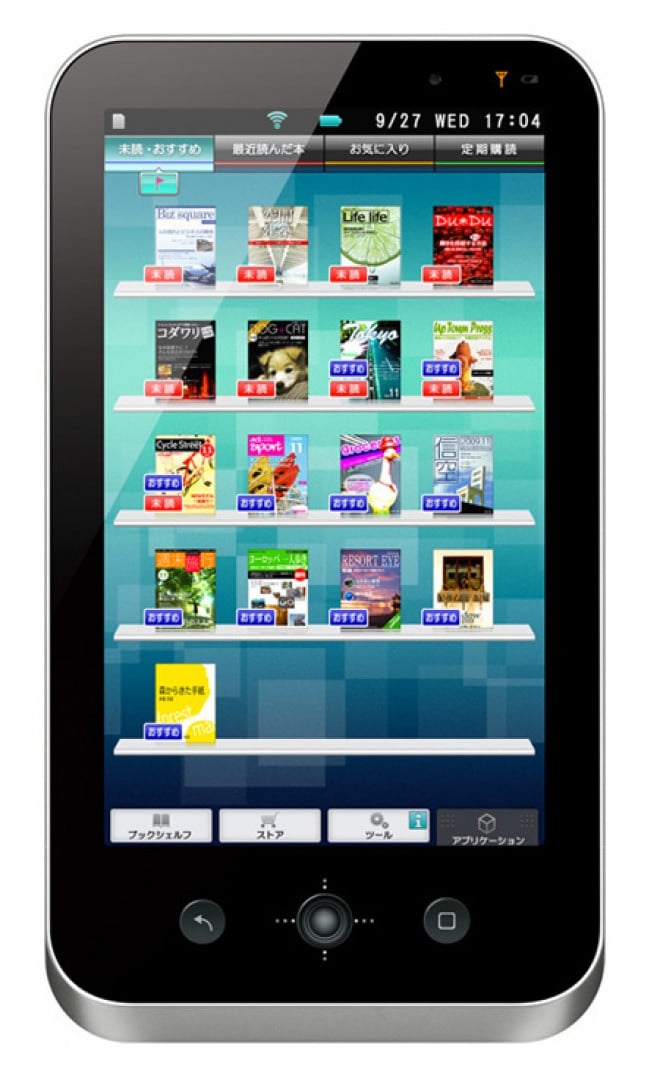 Sharp, along with many other companies, is getting into the Android game and bringing some tablets powered by the Google mobile operating system to market. The Sharp Galopagos tablets are being marketed as e-book readers, but should have much more functionality than any Kindle or Nook out there. There will be two models, a 5.5 inch option, as well as a 10.8 inch option.

Both of the Galopagos devices sport LCD displays and both models will have great resolution specs – the 5.5 inch model sporting a 1024×600 resolution and the 10.8 inch model coming in at 1366×800. The tablets will initially ship with WiFi only, but there should be a  Verizon 3G option somewhere down the road as well. No internal specs have been released, but we remain hopeful that the CPU will be on the snappier side. We’re also not sure what version of Android is running behind the scenes, but of course, we’re hoping for some Froyo love.

The tablets will allow for web browsing and document viewing, but will still remain heavily focused on the reading experience. Both Galopagos devices will ship with a built-in e-book store that will have 30,000 titles available to download at your fingertips. As far as pricing goes, we don’t know anything, but we can safely assume that it will be subsidized when it hits the shelves at Verizon.

Just add these to the stack of many upcoming Android-based tablets to hit the market later this year and early next year. It also looks like Verizon is definitely prepping quite an arsenal of tablets to combat AT&T’s offerings including the iPad, Dell Streak, and upcoming tablets like the Galaxy Tab and Looking Glass. By this time next year tablets will likely have saturated the market by offering different sizes and prices, and most of them will likely run Android. Hopefully by that time the standard tablets will at least sport a Tegra2, if not the Tegra3.

So, early adopters who don’t have an iPad, you’re going to have a decent selection of tablets to choose from for the holiday season. I still may wait to see some second generation tablets hit the market, but that Adam still rubs me the right way.

Check out the short videos to see the tablets in action

There's been plenty of custom ROMs out for the Nexus One for some time now but you've likely never seen...