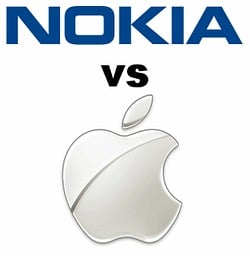 While we’re used to seeing Apple get sued by everyone under the sun, the Cupertino based company is now suing Nokia. It has been an ongoing legal battle between the two, but Apple is suing the Finnish smartphone maker in the U.K. for nine cell phone technologies.

According to Nokia spokesman Mark Durrant, “We are investigating the claims, which appear to be based on nine implementation patents already in suit between the two companies in the United States.”

Last October, the two companies started their legal disputes when Nokia accused Apple of freely using and profiting off of its technology.

The U.S. trade body ITC is set to decide on some of the claims between the two companies next year, while the key court hearings are scheduled for 2012 in Delaware.

At this point, it doesn’t seem like the lawsuits between the two are stifling technology development and hurting consumers, unlike patent trolls who sit on patents waiting for violations. It is those cases that many cry out for patent reform, and ultimately the consumer has to pay.