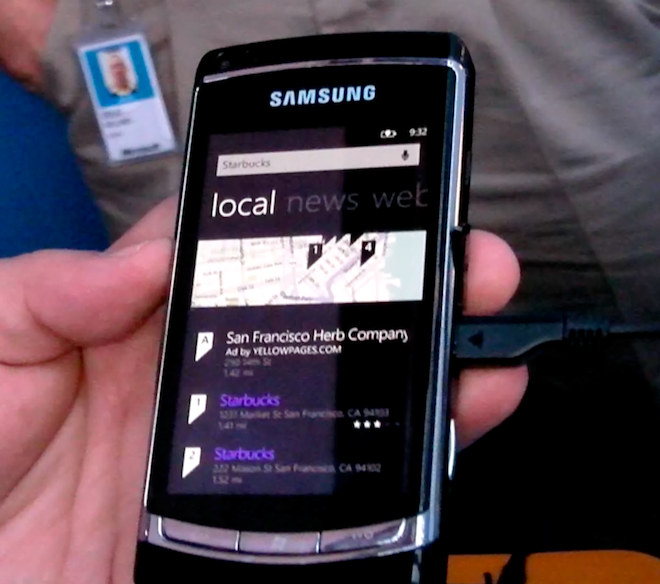 We know that the launch of the Microsoft Windows Phone 7 platform is right around the corner but we just couldn’t wait to show it off to you in HD video.

We spoke with Microsoft at the Mobilize conference in San Francisco and you can watch a walk through of the software in the video below. The demo is conducted on a Samsung handset that’s not final.

Windows Phone 7 represents a major gamble for the company and its mobile strategy because it is cutting off all backwards compatibility with Windows Mobile. Windows Mobile had its lunch eaten by Android, BlackBerry and the Apple iPhone but it still had millions of users, including a strong corporate presense.

The company’s new mobile platform immediately jumps out at you with the new Metro UI, which ditches the icons-in-a-grip experience for a live tile one. There are multiple hubs of information which can dynamically pull in information from various services.

The People hub, for instance, can pull in data from your contact lists online or from Facebook. Clicking on an individual contact will let you write on that person’s Facebook wall without having to launch a separate app.

Windows Phone 7 developers will be able to use Silverlight and XNA to create apps and these can integrate with the hubs or be a standalone experience. the app marketplace will be open soon and the company has been working its tail off to make sure it will have some big-name apps from the likes of Twitter and Netflix.

One of the big differentiators of Microsoft Windows Phone 7 will be the strong integration with Xbox Live. This will allow you to check up on your avatar and points, as well as eventually play games across platforms. The platform will also have a ton of games at launch, so mobile gamers may want to seriously consider it.

There is a lot more to go over but it’s much, much easier if you just watch the video below. Let us know what you think in the comments.