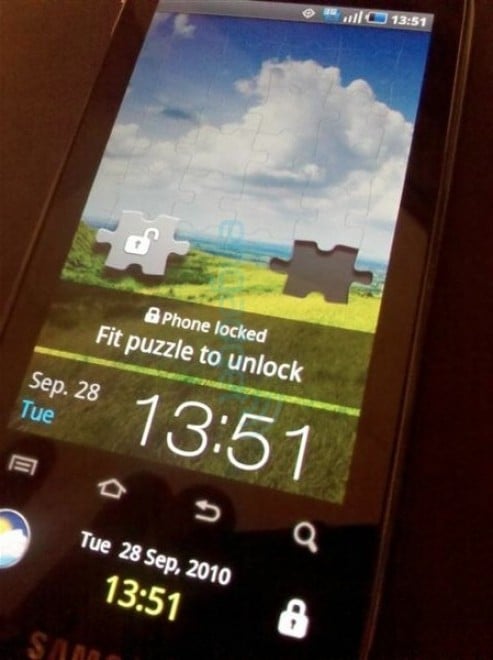 Some spy shots of an upcoming Galaxy S variant have surfaced – a variant known as the Samsung Continuum – and it’s looking mighty fine with its dual displays. The Samsung Continuum standout feature is that it sports a second display below the much larger screen.

So what’s this second display for, you ask? The second, smaller display is called the Ticker, and it will show you notifications, as well as RSS feeds along with the time and date. Awesome? One cool feature of the ticker is that it will automatically turn itself on when the bottom portion of the phone is grasped, eliminating the need to unlock the phone when all you need is the time or check your notifications. Of course, to reply to a message you’ll have to use the larger screen. But since it’s likely another Super AMOLED-toting device, we have no qualms with that.

The Samsung Fascinate may no longer be the go-to Galaxy S device for Big Red when the Continuum arrives. We’re curious to see if the Continuum still sport the 4 inch main display, or if it will be shrunken in size to make way for the Ticker. The device also comes with a hot-swappable MicroSD card slot (something the Fascinate also has) and a dedicated camera button – both of which are very welcomed additions to the Galaxy S line up.

As far as looks go, the Continuum has edges that are much more round than the Fascinate, more so than even the Vibrant. The back of the device looks like a bar of soap almost, and judging from the looks of the back’s finish, it may be just as slippery. That certainly shouldn’t turn you away from the phone, as it’s looking to be quite a killer device.

If the Continuum ends up having a smaller main display, would that sway you to get the Fascinate over the Continuum?

Couple of more pictures below!