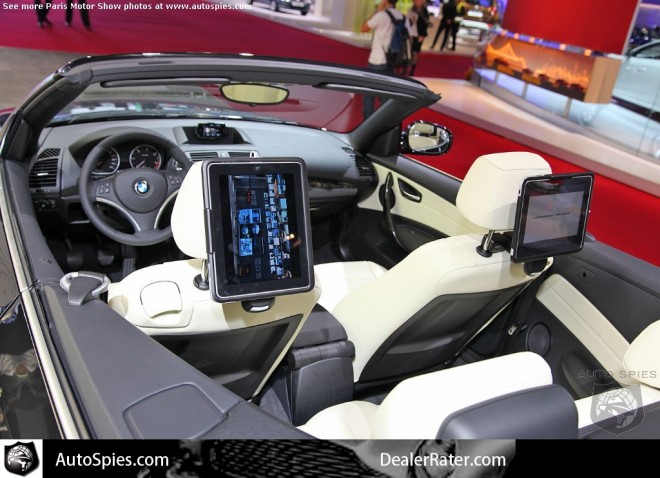 BMW has officially unveiled their in-car iPhone and iPad accessory docks at the Paris Auto Show today. We first caught wind of the official BMW iPhone and iPad in-car accessory docks from concept mockups not too long ago, so this isn’t exactly a surprise, but it’s still good to see an automaker embracing new tech with official accessories. The German automaker has been integrating Apple products into their cars for years now, so it was only a matter of time before ze Germans brought the iPad into the fray.

We’re not completely sold on the aesthetics of these official iPad and iPhone docks (the iPhone is docked in the dash), but we supposed something is better than nothing. Notice that the iPad docks can swivel to change from portrait to landscape orientation. Power is provided via an iPod cable routed through the seat itself. The dock seems to snap into the headrest. And, of course, no BMW accessory would be complete without the big “BMW” logo inlaid in brushed aluminum.

Take a look at the pics below and tell us what you think. Are these official solutions enough to get you to buy them? Or will you wait for more third-party solutions? Let us know in the comments below!

We have some of the pics here, but if you want more pics of the BMW iPad dock, hit the via link below!

T-Mobile Holds Off on 4G, Says WiMax is ‘Niche’

T-Mobile is the only carrier left without a conspicuous 4G plan. Sprint is already using WiMax and both Verizon and...