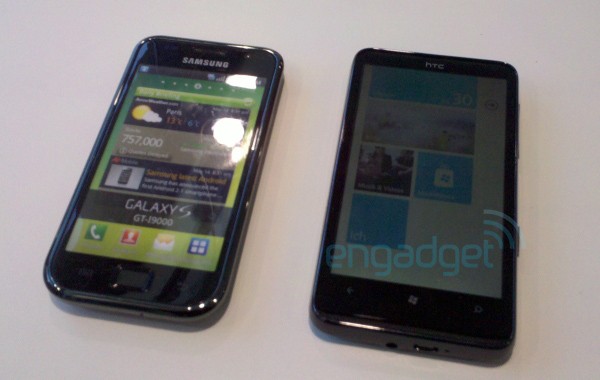 The HD7 from HTC has been spotted in inventory systems worldwide (including T-Mobile US), detailed, and photographed in the past. Now, the Windows Phone 7 handset makes another public appearance in what may be its last unofficial debut. In this latest leak, the touchscreen slate is pictured next to the Samsung Galaxy S, a revealing pose that highlights the rather large form factor of the HD7. The handset also stars in a quick video, available below, that shows off Windows Phone 7 with a distinctive German flavor .

For those that can’t keep track of the myriad of leaked WIndows Phone 7 handsets, the HD7 is the supposed successor to the HTC HD2 and retains the high-end specs of its older sibling with the following set of features:

This latest leak also points to a release date in Germany within a few weeks and a price tag of €559 (about $770) or €79 ($109) with a two-year customer agreement, a price we have seen before on a leaked inventory list from O2 Germany. Look for all of these details and more to be confirmed at Microsoft’s big launch event on October 11th. Press events are being held around the world and we will be there at the NYC one covering it live.

Last week, I left the safe confines of my office to New York City on what had to have been...