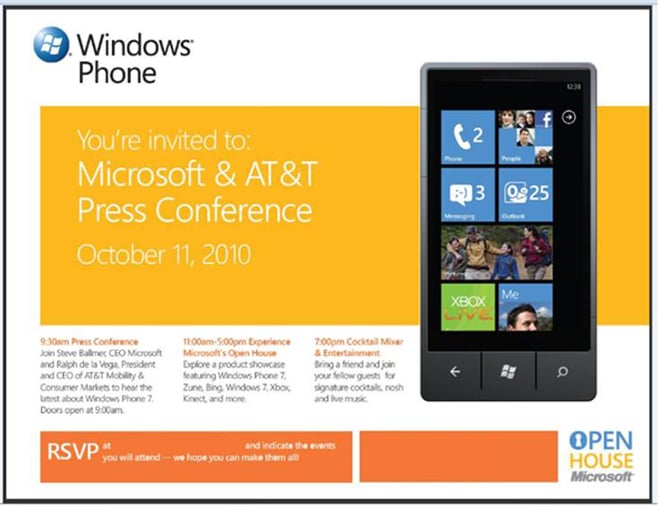 Microsoft confirmed that it will officially kick off Windows Phone 7 on October 11th. Events are planned worldwide, including one in New York City. The New York City event will feature a short but sweet keynote presentation with Microsoft’s Steve Ballmer and AT&T’s Ralph de laVega Lest you forget, AT&T is the preferred launch partner in the US and is expected to have three handsets ready for the big launch.

For those wondering what happened to T-Mobile and its appearance at the NYC event, those details leaked earlier by Engadget are partially incorrect. That event is not the official press event but an event for Microsoft customers only. T-Mobile customers can breathe a sigh of relief as both T-Mobile and A&T will have Windows Phone 7 handsets at launch. In fact, all carriers and manufacturers, except Verizon and Sprint, will be announcing their Windows Phone 7 offerings now that the floodgates have been opened.

Though the official debut is scheduled for next week, handsets are not expected to be available right away. October 21st is the rumored availability date in Europe and November 8th is the rumored on-sale date here in the US. All these details should be confirmed in a flurry of press releases which will hit the news wire in the upcoming weeks. It looks like Microsoft is gearing up to make a big splash with Windows Phone 7 this holiday season as five hardware partners, including Samsung, HTC, Dell, Asus, and LG, have handsets in production and a variety of carriers worldwide have signed up as launch partners.

Mark October 11th on your calendar and check back with us as we will be live at this New York launch event and will bring all the Windows Phone 7 details to you live as they happen.

Everything Everywhere to cut 1200 jobs or roughly 7.5% of the workforce [UK]

Everything Everywhere, the name of the merged entity that's one part T-Mobile UK and another part Orange UK, has announced...