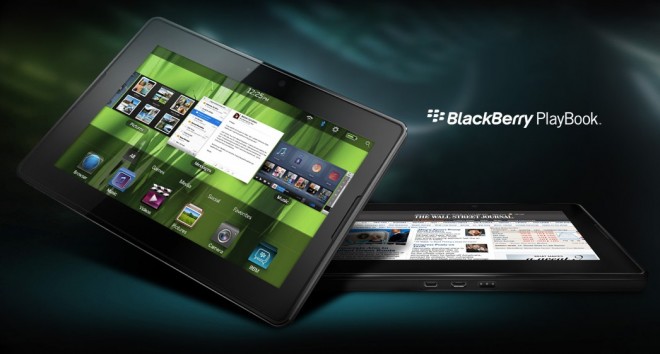 Rodman & Renshaw analyst Ashok Kumar has published a note explaining why the BlackBerry PlayBook, RIM’s first tablet, won’t be sitting snugly under Christmas trees this year. For one, the Neutrino operating system by QNX wasn’t ready – a fact which should be clearly apparent considering the controlled circumstances under which the device was shown off at the BlackBerry Developer Conference last week. Secondly, the PlayBook was reportedly plagued with bugs from the Marvell Armada 610 application processor they had been using, which has since been swapped out for something by Texas Instruments. It’s been made clear that a 3G or 4G version of the PlayBook is in the works, but plans to launch it sooner than summer 2011 “may not be realistic”.

The BlackBerry PlayBook is planned to launch in early 2011 with a 3 megapixel forward-facing camera for video conferencing, a 5 megapixel rear-facing camera capable of HD video recording, dual-core 1 GHz processor, 1 GB of ram, 7″, 1024 x 600 capacitive touchscreen, and a slim 10 mm profile. The whole package will be running a new OS made by QNX called Neutrino, which can handle rich Flash, 3D, and HDMI-based multimedia while keeping taxes on limited system resources to a minimum. The way Neutrino partitions applications will also ensure that if one app crashes, the whole system doesn’t suffer.

So far, RIM has already been pretty up-front about not getting the tablet out in time for the holidays, but how soon the 3G version comes out afterwards is the wildcard. Both Wi-Fi and 3G versions of the iPad launched together, and I would suspect that RIM would do the same if they don’t want to estrange carrier partners by offering no means of wireless data revenue. If the Wi-Fi version is the only one available on the market for even a couple of months, many who would have picked up a PlayBook with a data plan may very well just make do by tethering their BlackBerry to the tablet. Then again, carriers may be able to tap into that segment by charging extra to share data between the two, as some service providers have opted to do with the iPad.

In any case, despite the roadblocks, I’m glad that RIM announced the PlayBook rather than kept it under wraps until it was more complete; if showing the PlayBook at such an early stage means not being able to touch it and potentially waiting longer for a launch, then so be it.

If you believe a spy shot leaked to our friends at PocketBerry, then YES, BlackBerry OS is in a particularly...