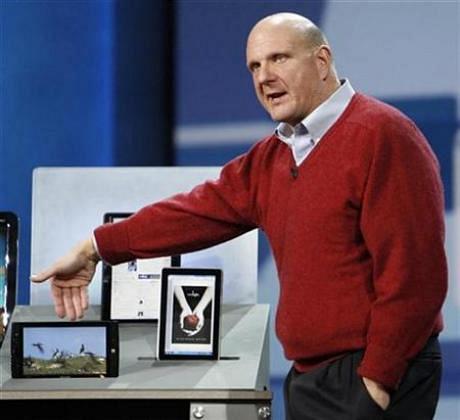 Do you remember Steve Ballmer showing off Microsoft goodies during this year’s CES where we saw some slate tablet computers? Whatever happened to those? According to Steve Ballmer, we’ll see the first glimpses of a Windows slate — presumably ones that will actually hit the market — by Christmas.

However, Ballmer didn’t specify whether we’d see the tablet PCs on sale by Christmas or the holidays. Additionally, there is no word on who will be manufacturer these would-be iPad competitors. HP seems a little focused on building webOS hardware and potentially tablets, although we saw an HP slate at CES. Samsung is dishing out Android on its Galaxy Tab, and LG says it’s holding off on building a tablet altogether until Android matures for the big screen. At this point, it’s really hard to say who will make the Windows slate.

“You’ll see new slates with Windows on them. You’ll see them this Christmas,” [Ballmer] told an audience of students, staff and journalists at the London School of Economics.

Yes, Steve, we’ll see them this Christmas but when will we actually get to buy them (assuming they’re any good)?

Perhaps one thing at a time, Microsoft. Windows Phone 7 will be unveiled on October 11, and there is a lot of cynicism from Windows Mobile fans and critics about just how well it will do. The folks in Redmond, however, think it’s enough to bury the iPhone and the rest of the competition. We’ll see about that.

For now, between the iPad and Android tablets, how many of you would prefer to have a Windows slate? Anyone?

GetJar Gives Away Millions of Premium Games for Free

While we've been focused on the enormity of the iTunes App Store, and the rising Android Market, we can sometimes...