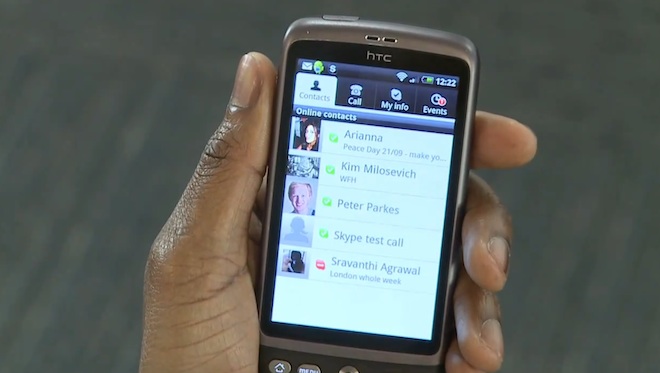 Skype, the application that practically everyone who has ever heard of the internet uses for things such as calling Mom to save money or having webcam sex with their girlfriend while you’re on business, has now released an Android application. Skype is now native to both Apple’s iPhone and Google’s Android operating system, so we can all stop using Fring … that oh so buggy software that’s a terrible kludge. The video is pretty self explanatory; hell, Skype is pretty self explanatory. It shouldn’t be that hard to figure things out.

How will operators feel about all of this? It’ll be interesting to see how much data a typical VoIP call takes. I can’t imagine it’d be more than loading a web page or two. What separates Skype from their legacy circuit switched operator cousins however is their advanced codec. Anyone who has recently had a VoIP call using a high quality headset knows exactly what I’m talking about. CD Quality doesn’t even begin to describe the joy it is to be on a Skype call. The only operator we know of that’s actively pushing higher quality voice calls is Orange UK. Now that they’re merged with T-Mobile UK I wonder if they’ll continue pushing such a niche technology to customers?

All in all today marks the day Android grew up. This writer remembers when Nokia announced their Nokia N800, and toted that it had built in Skype capabilities. Sadly the device shipped without them, and even with later firmwares the support was never really rock solid to use full time. Skype on the go is something I’ve been greatly enjoying on my new iPhone 4, and since most of my geek friends have switch to Android from Symbian, it’s nice to see that we’ll be able to save on calls seeing as how unlimited data packages are the norm.

Stick Golf HD for iPad: Can you Unlock ALL of the Achievements?

For anyone that enjoys the game of golf as much as I do, Stick Golf HD for iPad is a...