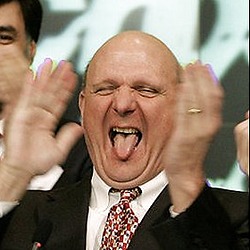 Steve Ballmer is hilarious. At a UK Tech Days event, the Microsoft chief hyped up Windows Phone 7, a platform that has yet to prove itself in the market, by basically back-handing Android for its fragmentation issues. While it’s great that Ballmer is looking to the future, he’s quickly forgetting that Windows Mobile was plagued with the same issues, albeit more pathetically.

Ballmer said that Android had issues with fragmentation, app development and OS updates. Whenever there is an update, developers have to follow suit with their apps for compatibility, he says. And when Google releases an update to Android, not all phones get it.

It’s true: Android is suffering from some fragmentation issues and all the points that Ballmer made are viable. But it’s tough not to get past the irony here. Microsoft has virtually no mobile presence right now, and the last time Ballmer boasted about Windows Mobile global numbers, Apple and the iPhone chewed him up and spit him out. I can’t think of a better example of fragmentation that Windows Mobile.

Is his new game plan to trash an operating system, whose market share and sales are quickly casting a huge shadow on its competitors, for fragmentation?

“Unlike Google, if you write an app for Windows Phone 7, it will work on all Windows phones,” says Ballmer. While that’s great and all, it’s unfortunate that it took Microsoft several years to realize this as he continues, “We got ourselves in to a little bit of a pickle with phones, but now we’re on track.”

Glad to see you back on track, Steve, but don’t get ahead of yourself.

The only thing consistent about Ballmer seems to be his hubris, and history shows that it really hasn’t gotten him anywhere in the mobile space. If Microsoft expects to remain relevant and to thrive, Windows Phone 7 is going to be it. The platform is what’s going to make or break the Redmond-based software company.

Microsoft Says Slate Computer Will be Seen by Christmas

Do you remember Steve Ballmer showing off Microsoft goodies during this year's CES where we saw some slate tablet computers?...