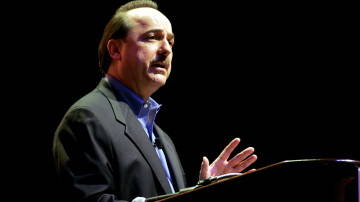 AT&T CEO Ralph de la Vega doesn’t think the tablet phenomenon is a fad, and the leader of AT&T’s mobile division said, during his keynote speech at CTIA San Francisco 2010, that we will soon see these computing devices have a big impact on consumers and businesses. With Apple rumored to have sold well over 8 million iPad units since its launch, and Android tablets coming hard and fast, de la Vega’s assertion that tablets will become a major force in mobile computing isn’t exactly hard to believe.

“The tablet revolution is coming and it looks like there’s no way to stop it,” said de la Vega during the opening keynote of the CTIA Wireless council. Indeed, there are numerous Android tablets already on market, with some seriously high-powered Android tablets due to hit market in the near future.

He said that tablet sales will rise 42% over the next five years and it will soon account for a quarter of all U.S. computer sales. The interesting thing about these devices, de la Vega points out, is that it will primarily be powered by mobile operating systems.

Tablets have been around for more than a decade but the Apple iPad really made it palatable for the mainstream. The “magical” tablet has almost made the market or, at the very least, accelerated the mainstream acceptance of these types of computing devices.

If the Apple iPad was a wake-up call, you can rest assured that other manufacturers got the message. Samsung has introduced the Android-powered Galaxy Tab and this 7-inch tablet will soon hit all four major U.S. carriers.

At CTIA, I also had some off-the-record conversations with Samsung people who told me that we can expect more tablets from the company in a variety of form factors. The company will also soon be pushing some of the home automation and controls that seem a natural fit for a tablet form factor.

Research In Motion will soon have its BlackBerry tablet and the PlayBook is squarely aimed at businesses wanting this type of computing device. Don’t sleep on Hewlett-Packard or Motorola either, as both are planning some killer tablets with the “PalmPad” and the “Stingray,” respectively.

De la Vega also said that combining the tablet form factor with mobile platforms and cloud-based apps will lead to a new generation of on-the-go productivity. The mobile parts of the equation will also lead to dramatically shortened innovation cycles.

I definitely agree that tablets have a strong future with mobile platforms but I’m wary about companies just throwing a smartphone OS on a bigger screen. Google has even said that Android isn’t optimized for tablets yet and I hope that manufacturers take the time to find a proper platform for this form factor instead of just trying to cash in.

AT&T has just announced the USBConnect Shockwave, its first mobile broadband modem that will allow users to connect to the...