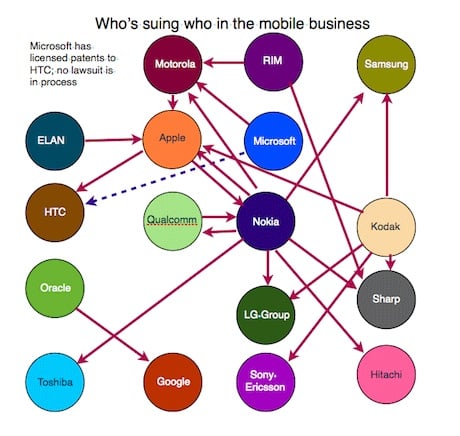 It is lawsuit week in the tech world. Earlier this week, Microsoft filed a patent dispute against Motorola. Today, Motorola tossed its own patent-filled grenade at Apple. In a public press release, Motorola confirmed that its Mobility subsidiary is filing a patent lawsuit against Apple over the iPhone, iPod touch, iPad, and select Mac computers. For those keeping track, Apple is also on the patent infringement radar of Kodak, Nokia, and ELAN. As shown above, it is a complicated web of competing lawsuits with nearly every mobile manufacturer involved in one way or another.

In its filing, Motorola requested that Apple stop using the American manufacturer’s patents in its products and asked for unspecified compensation for past infringing activities. As is the standard procedure in these patent disputes, Motorola also filed a complaint with ITC asking that the ITC investigate the Cupertino company and ban the import, sale, and advertising of Apple’s infringing products. In its public statement, Motorola suggests that Apple is aware of these patent violations and has refused to license the manufacturer’s technology, despite lengthy negotiations.

I am not a patent lawyer and can not comment on the validity of these patents. Similar to the myriad of patent lawsuits that are in various stages of the legal system, we will have to wait and see how this all plays out. That being said, I highly doubt this complaint will halt the sales of the iPhone, iPad, or any other iOS devices. Let’s hope it does not have any long-term effects that stifle innovation.

[Via Motorola, image courtesy of Mac Rumors and The Guardian]