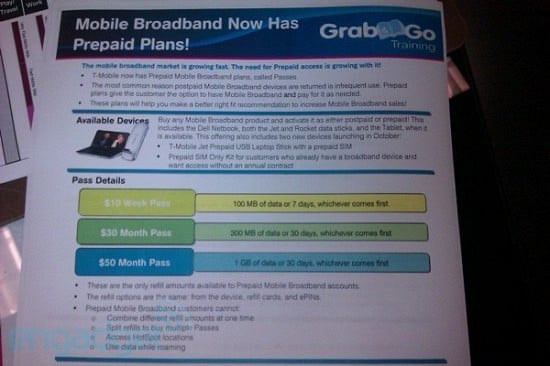 T-Mobile has some pretty nice pricing plan options these days, with both its Even More and Even More Plus plans. The bundled plans are pretty good and are probably only rivaled by Sprint’s Simply Everything plans. However, not resting on its laurels, it looks like T-Mobile will be offering a new set of prepaid mobile broadband plans to the mix.

According to a leaked document, the fourth largest U.S. carrier will be offering the prepaid mobile broadband options as follows:

Admittedly, those plans are a bit pricy, but they come with the perk of having no contracts and access to a fast HSPA+ network where available. Convincing anyone to actually pick up these plans is going to be another trick given options elsewhere, like Virgin Mobile’s Broadband2go option with a MiFi card. Sure, the network isn’t as fast since it’s using Sprint’s 3G network, but it’s unlimited and only $40/month.

Documents surfaced last week that suggested T-Mobile was going to bring WiFi calling to its Android lineup and today the...