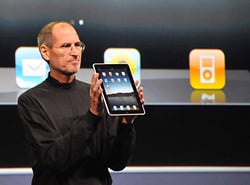 The 7-inch iPad rumor rises again, but this time it’s not just talk of a mini USB port. According to component makers in Taiwan, the new Apple iPad will have a retina display and 128GB of internal storage – all in a little 7-inch package. Additionally, the new iPad will be coming with a camera, which can almost be considered a given at this point.

While the retina display part seems nice, and totally welcome on a tablet computer, it seems more likely that the display will be higher resolution than the current model but not at levels that can be considered a retina display. 128GB of storage makes some sense, too. After all, if the tiny little iPod touch can pack 64GB of flash memory, why shouldn’t a giant iPad be able to hold twice as much?

Brian White of Ticonderoga Securities said this week that suppliers contacted during a trip to Taipei indicated that Apple plans to launch a new iPad in the first quarter of the 2011 calendar year. In addition to having a smaller 7-inch size, he also said the device will have a “micro or mini USB” port.

Given Apple’s tendency to refresh its product line annually, the introduction of a new iPad during the first quarter of 2011 shouldn’t shock anyone.

What will shock me is a 7-inch iPad, however, since it seems like a real ‘tweener device. We have a 3.5-inch screen on the iPhone and iPod touch, 10-inch screens on the iPad and 13-inch screens and up on the Macbook and Macbook Pro. Do consumers really want incremental screen size options?

Here’s something a little more outrageous, though:

Apple might ditch the 10-inch version (the current model which has sold over eight million units to date) for just a 7-inch model? Okay, I’m officially calling shenanigans here.

It looks like a new version of Bada OS and a firmware update for the Samsung Wave is around the...