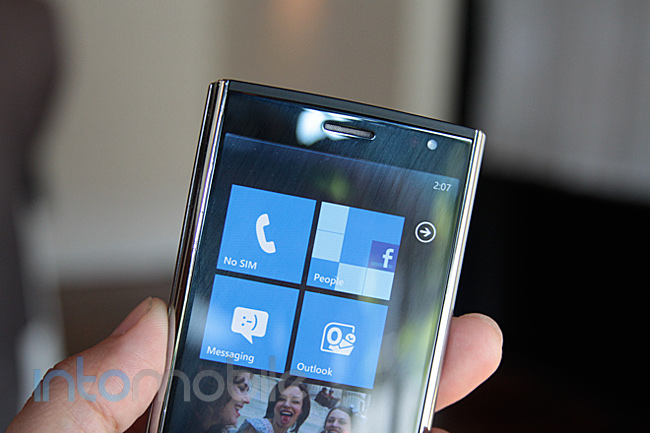 It’s been an onslaught of Windows Phone 7 devices today, but they’re still coming. Now we have some hands on action of the Dell Venue Pro, which is probably right up there in terms of my favorites with the HTC HD7. The Venue Pro, as you might have seen earlier, sports 4.1-inch display, 5MP camera and a 1GHz processor. As far as memory goes, the Dell Venue Pro will be packing 8GB of internal storage.

Being a T-Mobile bound handset, we’re pretty sure that it’s going to support the carrier’s 3G network. But like we said earlier, it looks like it will be available straight from Dell and select retail partners to start, and it’s hard to say whether it when or if it will hit T-Mobile retail stores.

The Venue Pro is one svelte phone. The first thing I noticed when it was handed to me is the weight and heft — Dell certainly didn’t skimp on materials here. Of course, weight can sometimes be deceiving, so I was happy to find that the sliding mechanism was very firm and solid. It opened and closed smoothly with a rather satisfying thunk at each end, letting me know that it was fully opened or closed.

When closed, the front of the phone looks like your average touch screen display. However, when you slide it open, it reveals a physical QWERTY keyboard. It’s the only portrait keyboard Windows Phone 7 device so far – the others with physical keyboards open up in landscape orientation.

The back of the Venue Pro is glossy, but textured with a slick design pattern. It definitely doesn’t give me the impression that it’s going to get slippery and slide right out of my hand. In all, this Windows Phone 7 handset doesn’t feel like your average smartphone in hand — it’s solid, has some serious heft, and is very clean and polished.

With a handset like the Venue Pro, one thing that’s going to make or break it is the keyboard. After being spoiled for so many years with BlackBerry, and even some decent keyboards on HTC devices, I was a little disappointed with the Venue Pro. Personally, the keys seemed to be too small and packed together too tightly. Each key also had somewhat of a bubble shape, much like the Nokia E71, and it felt like it could take some getting used to before anyone can pick up any serious speed. But this is all a matter of preference and I don’t think it takes away too much from the phone.

Overall, the Dell Venue Pro was definitely one of my favorites of the plethora of Windows Phone 7 devices introduced today. But I feel like there were some minor annoyances, like the keyboard, that could potentially become really annoying over time.

Check out the HD video and the photo gallery below!

Angry Birds, Microsoft are in a scuffle

The folks at Rovio may want to load some of those big, fat red birds in a slingshot and aim...