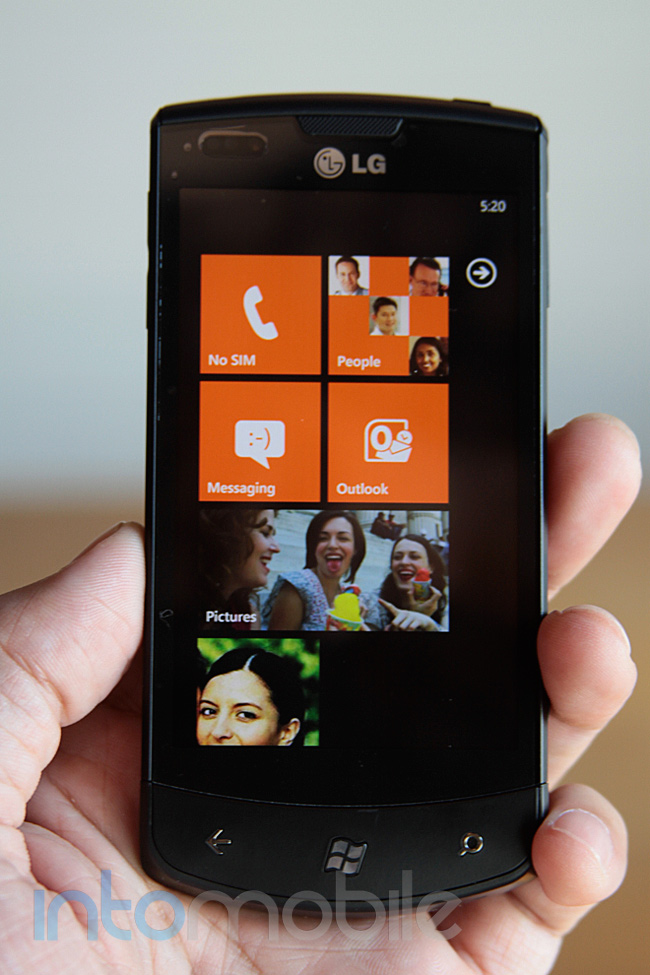 The Windows Phone 7 coverage just keeps a-rollin’ here at IntoMobile. The next phone that we got our cheese-doodled hands all over was the LG Optimus 7, LG’s mid-level Windows Phone 7 device.

First off, let’s take a quick look at the specs of the phone to get you up to speed on what to expect from it:

The LG Optimus 7 had a good weight to it, but it didn’t feel neither too heavy or too light. For what’s hidden underneath its exterior, the weight felt appropriate and wasn’t misplaced. Even though the LG doesn’t rock an amazing screen, such as the Apple iPhone 4’s Retina Display or Samsung’s Super AMOLED screens on all of its Galaxy S phones, its 3.8-inch WVGA display was impressive as photos and video looked great when displayed. The Windows Phone 7 OS was very responsive and acted as it would be expected on a Windows Phone 7 device. In other words, the LG Optimus 7 was able to handle the Windows Phone 7 OS flawlessly from the short hands-on time I was given with it.

Most phones nowadays are favoring the touch sensitive button look to keep the front of their phone completely smooth, but the LG Optimus 7 decided to go with a raised Windows, Back, and Search buttons. The reason for the raised Windows button would have to be so it’s easy to find when you’re not looking at your device. The back and search buttons are easy enough to find through blind use since they’re at the edge, but its raised buttons certainly make it near impossible to miss.

One of LG’s proprietary apps on both the Quantum & Optimus 7 was the PlayTo application. The Optimus 7 can be used as a mobile photo, music & video streaming device for any device that is capable of connecting through DLNA. The app wasn’t tested since a DLNA compatible device wasn’t available at the time of my hands-on demo, but LG assured me it was a simple process to set up.

The LG Optimus 7 was a solid Windows Phone 7 Device and compared to the LG Quantum, it felt and looked like a higher-end device. It may not have the recognition of the HTC Surround or the Samsung Focus, but I feel LG has created a product that accurately encompasses the Windows Phone 7 experience.

It's been an onslaught of Windows Phone 7 devices today, but they're still coming. Now we have some hands on...