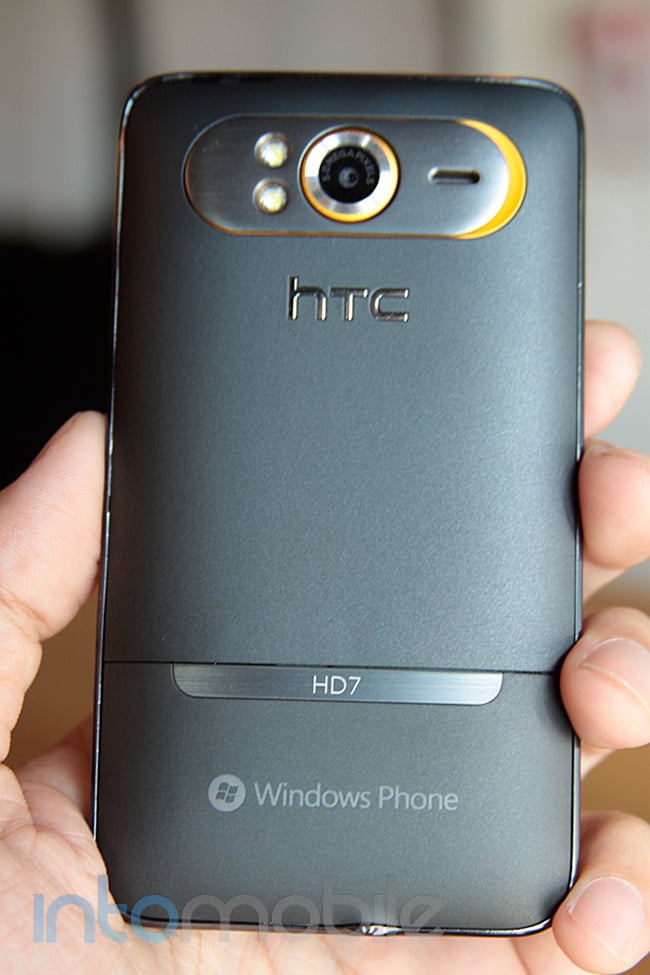 The Windows Phone 7 launch today in NYC went off like gangbusters for Microsoft, but the company’s WP7 smartphone manufacturing partners also enjoyed the spotlight – especially HTC and the HTC HD7. As the only Windows Phone 7 handset to sport the 4.3-inch WVGA capacitive touchscreen, the HD7 is the biggest and most multimedia-savvy WP7 phone on our near-term radar. And, thanks to its stereo speaker setup, it’s the HTC HD7 should deliver some impressive audio performance, for those so inclined.

As far as specs are concerned, we had no doubt that the HD7 and its ginormous 4.3-inch display would pack some impressive hardware. The big-screen lies atop a 1GHz Snapdragon processor (first-generation), 5-megapixel camera, 8GB onboard storage, 3G data connection, WiFi, GPS, Bluetooth, 3.5mm headphone jack, stereo speakers, and an integrated kickstand – a la the HTC EVO 4G and HTC HD2. We would have liked to have seen at least 16GB of onboard storage and an 8-megapixel camera, but hey, you can’t win ’em all.

The HD7 feels more svelte in the hand than the EVO 4G. That’s not too surprising, though, seeing as how the EVO 4G packs an additional WiMAX radio, microSD card slot, and an 8MP shooter. The overall impression we got from the HD7 was that it was the sleeker, Windows Phone 7-toting version of the HD2. That’s a good thing.

The kickstand has been revised. We don’t like the way the kickstand doubles as the bezel around the camera lens and LED flash bulbs, but some of you out there might appreciate the more efficient aesthetic. Check the photo gallery to get a better idea for what the kickstand looks like.

Overall, the HD7 joins the Samsung Focus and Dell Venue Pro as the three most desirable WP7 handsets to be launched this year. Again, the HD7 could stand to have a bit more onboard storage and a better camera, but the form-factor is simply drool-worthy and the stereo speakers flanking the display are undeniably sexy.

One of the biggest software publishers of the gaming industry announced earlier today at Microsoft’s Windows Phone 7 launch event...