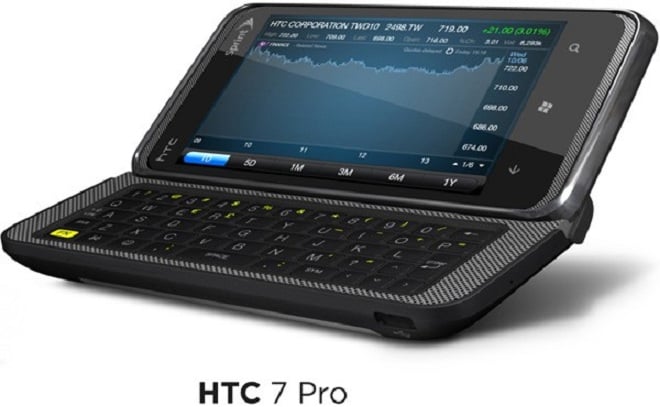 If you’ve been drooling all over the Windows Phone 7 smartphones announced this morning but are sick because you’re stuck on CDMA, don’t worry, as HTC has your back. The HTC 7 Pro will bring Windows Phone 7 to Sprint in the first half of 2011.

This is consistent with what Microsoft has said in the past about supporting CDMA carriers and the HTC 7 Pro looks like it’s aimed at business users with a full, slide-out QWERTY keyboard.

In a press release, HTC described the device as:

The development of the HTC 7 Pro was inspired by power users who want to combine the ultimate in business efficiency with the ability to take full advantage of their leisure time. The sleek handset slides opens and tilts to reveal a full QWERTY keyboard for fast, comfortable typing, while productivity features such as the ability to sort, scan and manage Outlook email, open and edit the latest Office documents on the phone and keep track of the markets with HTC’s stocks application, offer new ways to maximize the business day.

The HTC 7 Pro will also have a 1 Ghz Snapdragon processor, 448 MB of RAM, a 3.6-inch screen with WVGA resolution (480 X 800), a 5-megapixel camera capable of HD 720p video and it will have 8 GB of internal storage. It fits nicely in the handset maker’s lineup of Windows Phone 7 devices.

With the HTC 7 and the Trophy, we know that Sprint will have two Windows Phone 7 smartphones within about six months but what about the biggest CDMA carrier Verizon? It’s too soon to tell, as Verizon seems to be going all-in with Android.

We’ve covered what to expect from Windows Phone 7 but the platform takes a new look at how you interact with your smartphone. The company is trying to move people away from diving into apps and instead focuses on dynamic tiles and hubs which aggregate information dynamically.

Yet another nugget from the ongoing Windows Phone 7 announcement is the HTC Mozart, which we had seen a glimpse...