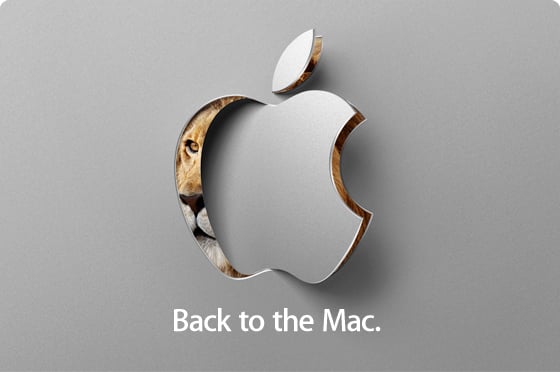 There are some who think that Apple is only focusing on its iOS platform with the iPhone, iPad and iPod touch but the company has scheduled an event next Wednesday to introduce the latest version of its Mac OS software. That’s right folks, let’s get ready for Lion.

We’re not IntoDesktops or IntoLaptops but I thought this event deserved some coverage because Apple has become a major force in the mobile space in just a few years. I was doubting how successful a company that only had the Rokr E1 on its resume could be but Apple has consistently proven me, and countless others, wrong.

It is not unfair to say that the Apple iPhone has galvanized the smartphone space with its iPhone and App Store and we know that iOS now makes up about 40% of the company’s profits. Look for that to continue as we get updates to the iPad and iOS devices.

Still, the Mac OS business makes up about 30% of Apple’s revenues, so the Lion update is still important. This also has implications for the iPhone and iOS because there are still many who would argue that the best way to create these apps are within a Mac OS environment.

If it were up to Steve Jobs, developing and using iPhone apps would be an Apple experience from the beginning to the end. That’s one of the reasons the company banned non-native iPhone developer tools.

Of course, this caused government agencies to take a look at Apple and its development environment and many speculate that Jobs’ company didn’t think the fight was worth it. That’s why you can now use Adobe’s Flash compiler program to create native iPhone apps, as well as a bunch of other tools.

We’ll see what the company shows off and let you know how this impacts your iOS devices.

Apple, ever so wholesome, has been hard at work to make sure our iPhones stay clean of any filthy or...