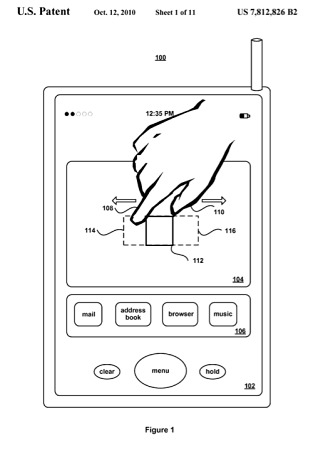 We’ve been hearing so much about pinch-to-zoom and multitouch wars the past few years that it’s no surprise that Apple has gotten what it wants: a patent on the technology. However, it does come with a set of limitations, but you can bet that Apple will be using every little bit they can against competitors.

Where are the limitations? Well, it’s all a matter of gesture timing, actually. Engadget lays out the rules here:

Number 5 states that a second set of contacts must be detected after the initial contact is broken. You know how this works: you’re in an image and you want to zoom in or out more than one pinch will let you, so not even a second after the first pinching motion, you’re pinching again.

In number 6, Engadget emphasizes that there must be a specific period of time between the first set of contacts and the second. That time is unknown, but is most certainly specified in order for the rule to hold water.

Now that nearly every touch screen device employs this technology and the gestures we’re all used to using, it will be interesting to see where Apple decides to take its new ammo. After all, the patent was originally applied for by Apple on December 29, 2006, so it has been a long time comin’ for the folks in Cupertino, CA.

Is Microsoft Windows Phone 7 too expensive to succeed?

Microsoft is going all out for the mobile space with its Windows Phone 7 lineup and at least one industry...