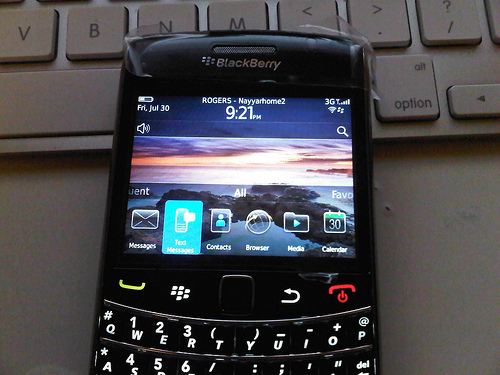 An undocumented rumour has been floated out suggesting the refreshed BlackBerry Bold 9780 would be finding its way to Rogers on October 27 for $149.99 on a three-year contract. This jives well enough with info that Bell (by way of Virgin Mobile) and Telus would be picking it up at around the same price point on October 21, though previous rumours specific to Rogers suggested a release wouldn’t be until mid-November.

Whatever the case may be, we’re pretty confident that the 9780 will have Wi-Fi, GPS, 3G, an HVGA display, upgraded 512 MB of RAM and 5 megapixel camera, as well as run the new BlackBerry 6 operating system, complete with UI improvements, WebKit browser, and universal search. Those with a 9700 already will probably make do with the OS 6 upgraded headed their way, but for anyone still carrying the original Bold and not interested in the Torch, the 9780 will likely be their cue to upgrade.

Outside of Canada, AT&T and Vodafone are likely to nab the new Bold, but it’s such a minor upgrade that most consumers won’t even notice when the old 9700 gets phased out.

AT&T was late to jump on to the Android boat and, when they did, it wasn't pretty. The second-largest U.S....