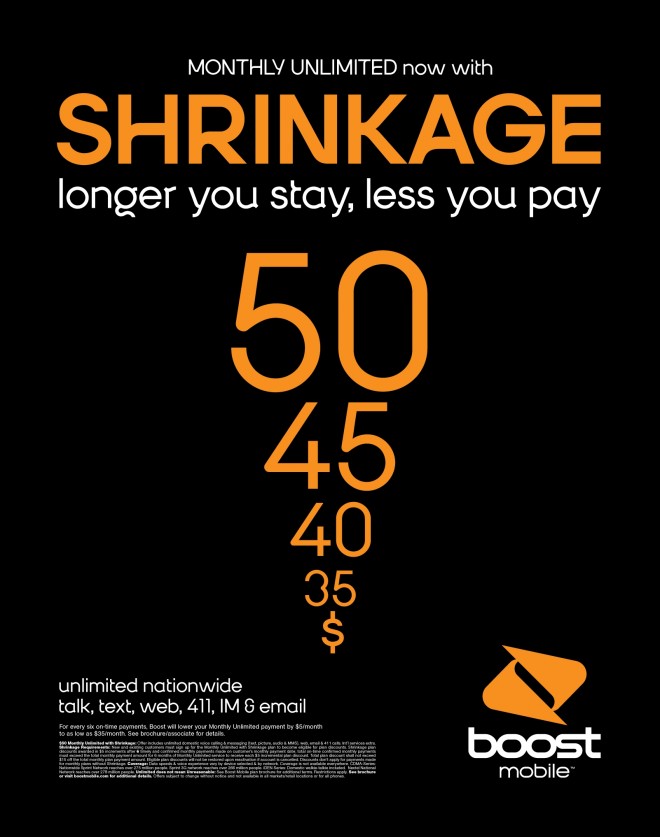 Boost Mobile is introducing a “Shrinkage” plan for its monthly, no-contract plans and this will make you bill cost less per month if you stay with the carrier for a while.

I’ve long contended that Boost Mobile has some of the best plans around, as $50 a month will get you unlimited talk, texting and surfing. The company is kicking the value up a notch by cutting off a portion of that bill if you continually pay your bill on time.

For every six on-time payments, your bill will be cut by $5. That means you’ll eventually be able to get your bill down to $35 a month for unlimited talking, texting and web (that’s the floor for the discount).

“At a time when consumers are looking for ways to save their hard-earned money, we’re rewarding Boost customers by helping them shrink their monthly payments,” said Bob Stohrer, vice president-Marketing, Boost Mobile, in a prepared statement. “Throughout the year, we’ve enhanced our device lineup with Android and Blackberry devices and added more benefits to our Monthly Plan. Now, we’re introducing even more value, all with no annual contracts. Shrinkage is yet another demonstration of Boost’s commitment to ‘unwronging’ wireless.”

It’s a strong multiple reasons, as the discount is a good value for the consumer. One of the biggest problems with the prepaid market is that customers are quick to jump ship because they’re not locked in to a long-term contract but adding rewards or value for loyalty could help keep some users on Boost Mobile.

The move comes as the prepaid market is quickly becoming a large battleground. MetroPCS has quickly risen to become the fifth-largest U.S. carrier thanks to its no-contract plans and it will soon be offering 4G phones with Long-Term Evolution technology. Cricket is still kicking and has a sizable portion of the prepaid market, as well.

We already had an inkling that RIM's next OS 6 device, the BlackBerry Style 9670 clamshell, code-named Oxford, would be...