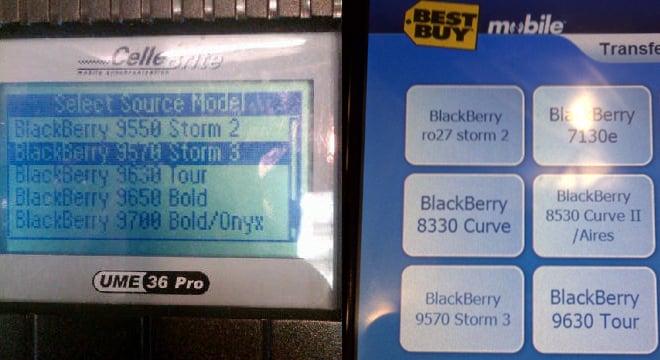 It was looking pretty certain that the refreshed Storm that jammed BlackBerry 6 onto the Storm 2 was going to be canned, but there are still signs of life in internal Verizon retail systems. There are two pictures here, showing the BlackBerry Storm 3 9570, clear as day, but I still suspect these are relics from before the cancellation. It’s interesting that they’re being listed as the Storm 3 too, since it seemed to me like the real Storm 3 is that bigger one we saw with a trackpad.

The BlackBerry 9570, as we knew it, bumped up the camera on the Storm 2 to 5 megapixel, and app memory to 512 MB, but otherwise kept the same SurePress clicking touchscreen, HVGA display resolution, GPS, Wi-Fi, and 3G. It would launch with OS 6, probably acting a lot like the Torch, but RIM has been really quiet about a software upgrade on previous Storms; I think that’s a subtle sign that we won’t see it, but it does potentially mean the next Storm will run QNX’s Neutrino operating system.

Whatever the case may be, given the new evidence, let’s not rule out a refreshed Storm just yet. RIM went through the trouble of refreshing the Curve 8520 and the Bold 9700, there’s no reason they wouldn’t do it for the Storm 9550.