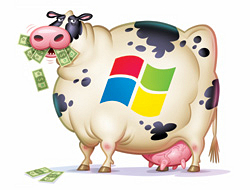 Microsoft held its little shindig in New York City last week to unveil Windows Phone 7 for the press. And while we got a nice, healthy glimpse into the operating system and the devices it will support, most of the general public still haven’t heard much about Windows Phone 7. How is Microsoft going to change all that? With the help of roughly $500 million dollars in advertising.

Microsoft is also planning to spend just as much on advertising its Kinect hardware — the human-motion-controlled accessory for the Xbox 360.

We discovered last week that Isaiah Mustafa, or perhaps better known as the “Old Spice Guy,” would be helping Microsoft with advertising Windows Phone 7. That should probably be a pretty good hit if it’s done correctly.

Given all the dough that Ballmer and friends are putting behind advertising this product, I’m expecting to see something pretty grand or at least Internet meme worthy. I would expect to be at least remotely tempted to buy a Windows Phone 7 device. So let’s see what Microsoft comes up with next.

RIM and Sprint have just made an official announcement for the BlackBerry Style 9670 clamshell, and those rumours we had...