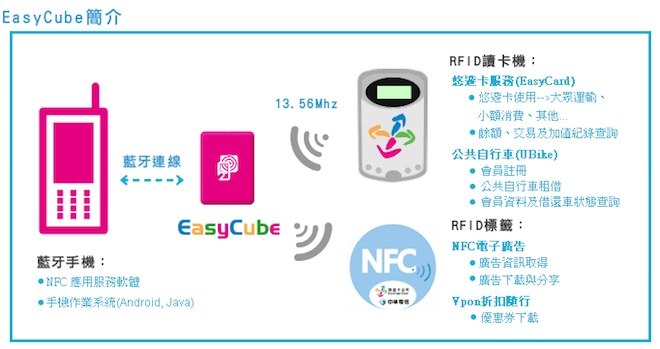 Near field communication (NFC) is something that gets our hearts pumping here at IntoMobile. To image that one day all we’ll need to carry with us when leaving the house is a mobile phone, and that it’ll handle everything from opening our front door, to paying for groceries, to getting on the subway, is a fantasy that will be fully realized in all of our lifetimes. Until that happens however, what are customers to do? You could ask people to upgrade their mobile phone, to get a new model with NFC, but that’s too costly. You could also ask customers to put a sticker on the back of their device, but that’s aesthetically unpleasing. Taiwanese operator Chunghwa Telecom is trying something unique. They’re giving customers 10,000 units of a device known as an “EasyCube” to conduct some field trials. It’s an NFC reader/writer that connects to your mobile phone via Bluetooth, letting you keep your phone in your pocket at all times, and just using the EasyCube like a wireless key.

Specifications are not available, and I desperately wish I could tell you the dimensions of this thing and how long the battery lasts, but either way, you’ve got to admit that this is a novel way of solving the chicken and the egg problem currently facing operators and device manufacturers. Should they make devices with NFC and offer it to their customers? No, since the amount of readers on the market are limited. Should stores, cities, and apartment building upgrade their infrastructure to support NFC? No, since there are no devices on the market that have the technology built in. It’s a painful push and shove debate that does nothing but waste people’s times and fills geeks like us with wanderlust for places like South Korea and Japan where the government is actively pushing the deployment of this sort of technology.

PayPal for iPhone Now Scans and Deposits Checks by Camera

Last week, we had heard that the PayPal app for iPhone would be able to take pictures of checks and...