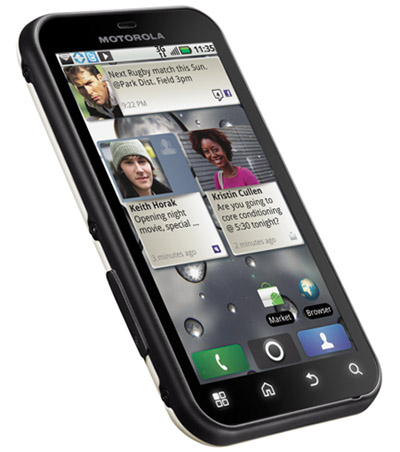 Although we knew T-Mobile will get to sell the Motorola Defy, up until now we didn’t have the exact release date. The Deutsche Telekom-owned operator helped all of us, tweeting the day and price – and it’s set on November 3rd, when interested folks will be able to grab the rugged Android smartphone for $99 on a two-year contract.

In addition to its “rugged nature” — i.e. being dust proof, scratch and water resistant — the Defy also comes with the brains under the hood. Features include a 3.7-inch WVGA capacitive touchscreen, 3G and WiFi connectivity, GPS, 512MB of RAM, 800MHz CPU, large 1540mAh battery, Bluetooth, 2GB of built-in storage that’s further expandable with microSD cards. Of course, Motorola’s own MOTOBLUR UI is running on top of Android, allowing users to keep up with their buddies across social networks, Facebook and Twitter included.

Not sure what you think, but at 100 bucks the Defy sounds like a great deal to me…

I fully expect that most of you reading this have never heard of the Saskatchewan Roughriders. If you haven't, feel...