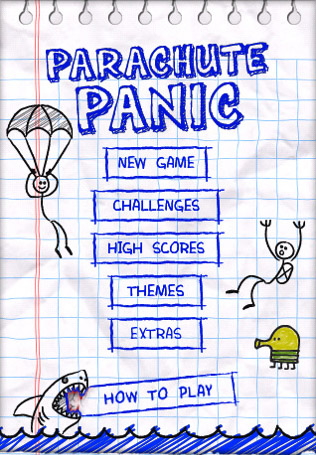 Parachute Panic, one of the most popular titles in Apple’s AppStore, will be ported to Windows Phone 7. The game, which has been downloaded for more than 4 million times by the iPhone and iPod Touch users and has been also ported to Samsung’s Bada OS and Java ME platforms, will definitely find its audience among forthcoming army of folks with a Microsoft-approved smartphone.

As you may know, Parachute Panic is a simple game that sees you rescuing free-falling stick man by opening their chutes and landing them on passing boats. If you miss a boat, your stick man will be eaten by a shark. Moreover, there are other obstacles along the way, including choppers and dark clouds… It may sound dull, but it isn’t — rather it’s one of those games you’ll be returning to every now and then.

Release date for the Windows Phone 7 version is unknown, but I doubt FDG Entertainment (developer of the game) wants to wait for too long. That being said, it’s fair to guess Parachute Panic will hit the Windows Marketplace for Mobile within weeks, maybe even days…

Pocket Devil – Hell Yeah! gets a Halloween update, too

After Flight Doodle, Eyedip is bringing the Halloween update to its other popular title - Pocket Devil - Hell Yeah!...