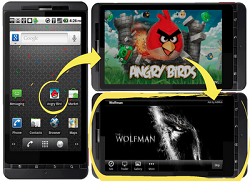 Get ready for some more ads, as Google AdMob is bringing interactive video ads to Android apps. Sure, it sounds kind of cruddy but remember that these ads could lead to more free, high-quality apps for all of us.

Google AdMob had already been providing interactive video ads to the Apple iPhone for almost a year now and it is finally bringing this capability to Android via a software development kit. According to Google’s mobile ad blog:

Extending rich media interstitial ad units to Android creates an exciting opportunity for mobile advertisers to reach a much wider audience across platforms and devices. These interactive ad units have proven to be extremely effective in engaging users on iOS and we look forward to helping our advertisers reach more users than ever across platforms.

Unless you’re a developer, this may not seem like a very big deal but if it is successful in getting users to click on these advertisements, it could lead to more free apps.

Let’s use Angry Birds as an example, as the addictive game was very successful on the Apple iPhone and iPad platform as a paid app but the Android version was released for free with advertising. The developers, Rovio, must have determined that it could make more revenue off ads than directly selling it, so we get a free game with some ads.

The move by Google AdMob also shows how the mobile advertising market is heating up. Mobile ads have generally just been boring text banners but that’s starting to change.

Apple upped the ante in this space with the introduction of iAd with iOS 4.0 and this enables ads to do everything the iPhone can. Independent companies like Greystripe are also raising the bar by bringing Flash-originated content to the iPhone and other platforms.

If you're like us, you really dig the Dell Venue Pro but some people may not think that Windows Phone...