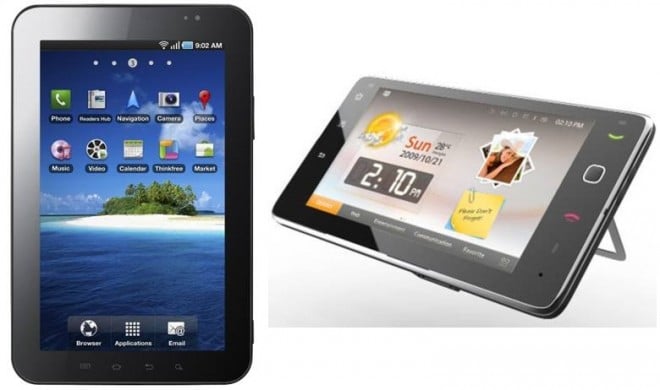 We’re well aware that Best Buy intends to have a rather decent selection of Android tablets available for the holiday season, and we knew that the Samsung Galaxy Tab would be one of them. What we didn’t know is that starting today you can pre-order the Galaxy Tab as well as the Huawei S7 tablet.

We’ve had quite a bit of hands-on time with the Galaxy Tab, but we’ve yet to see the Huawei S7 grace our presence. Also a 7 inch tablet, the S7’s been floating around the web for sometime now, with no definite launch date, or where it will actually be released. It sports its own built-in kickstand, so you won’t need hold the tablet while watching a movie, one of the firsts in the tablet space we’ve seen so far. The S7 also comes with a 1 GHz Snapdragon CPU, front and rear facing cameras, the expected WiFi, Bluetooth, 3.5 mm headphone jack, as well as 720p HD video playback, 2 USB ports, MicroSD card slot, and Android 2.1. The S7 also comes with a dock that has a HDMI port for connecting the tablet to your HDTV.

Early reviews of the S7 tablet have been less than stellar, and the resistive touchscreen is practically a deal-breaker, but it’s said to be very sensitive. We’ll have to get the tablet in our hands and put it through its paces before we come to a solid conclusion. The good news? You’ll be able to grab one of these for only $299, $200 cheaper than the upcoming WiFi-Only Galaxy Tab.

As far as the Galaxy Tab goes, your only pre-order options are the Sprint and Verizon 3G-enabled versions at the moment. The WiFi-only version should be on its way soon, but in the mean time you’ll have to shell out $599 for the thing. If you’re in the market for a 3G-toting Galaxy Tab, Sprint is the way to go so far, offering the Tab up for $399 on a two-year contract.Verizon will sell the tablet for $599 with no contract, so you have some options when it comes to the way you want to buy the Tab if you so choose.

We’re still waiting for AT&T and T-Mobile to announce pricing and availability for the Tab, but if the prices don’t sound too appealing, you will likely have fun with the S7.