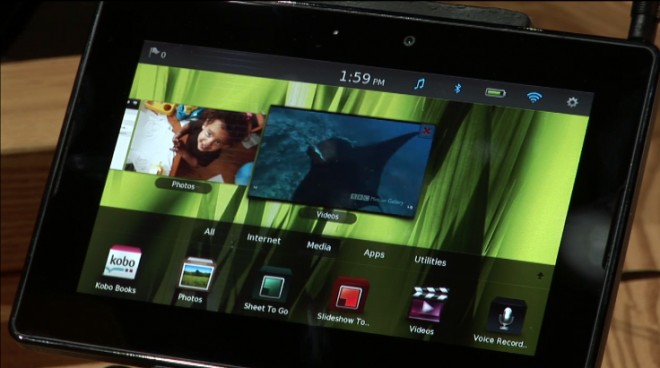 We watched the replay of the live stream from earlier this morning where RIM’s co-CEO Mike Lazaridis showed off the BlackBerry PlayBook tablet, and snagged the full demo for those of you who missed it.

For those unfamiliar, the PlayBook has a 5 megapixel camera on the back, a video conferencing camera on the front, has a 7″ 1024 x 600 capacitive touchscreen, dual-core 1 GHz processor, and 1 GB of RAM. It’s a beast of a machine, and only now are we really starting to see how it can be flexed on software.

There’s a bit at the beginning I missed since the speaker didn’t introduce it as the BlackBerry tablet until after the demo, but there is a glimpse of it before Lazaridis steps on. That eUnity app is being trialled by a hospital in Toronto to view x-rays remotely. Using the multi-touch display, medical professionals could measure the real-world distance between two points and the surface area designated within a shape formed through multi-touch gestures.

Not only are third-party apps like SAP’s CIO Cockpit and Salesforce Chattr made using Adobe AIR, the native media viewer was written in Adobe AIR also! How smoothly the PlayBook handled HD video and multitasking is a testament to Adobe’s new tools. Notice how the multitasking, webOS-esque card view is pulled up by gestures coming from outside the display area on outer frame. I always liked the gesture area that the Palm Pre and Pixi had, and I’m glad to see RIM borrowing the good idea.

Finally, RIM is dangling the promise of a free BlackBerry PlayBook to developers who submit their apps early, which is a definite pull considering how great the hardware is. To watch the full keynote, head over to the Adobe MAX page which has the stream running on loop. There’s plenty of content focused on mobile through the whole thing.

Update: It looks like Adobe MAX just uploaded their official version of the demo. Luckily, it includes that medical app I was mentioning earlier. Take a looksee.

We're well aware that Best Buy intends to have a rather decent selection of Android tablets available for the holiday...