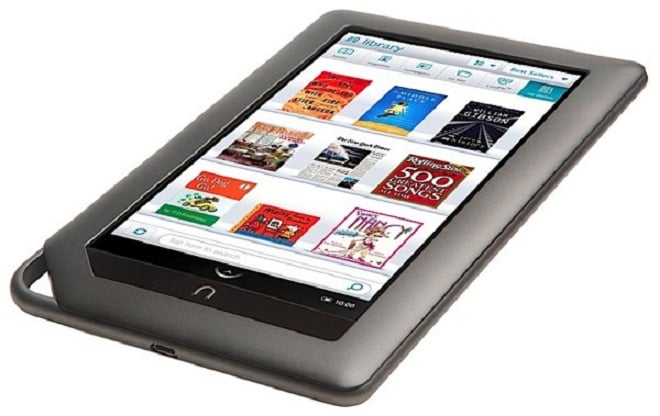 Barnes & Noble is bringing some flair to the normally boring e-reader space, as the Nook Color features a 7-inch color touchscreen, still runs the Android OS and it will be able to run a variety of apps.

The Nook Color will cost $249 and it can be preordered here and it’s an interesting take on the e-reader market, as this has more in common with the iPad and the slew of Android tablets on the market than it does with the Amazon Kindle.

Gone are the relatively boring e-Ink screen and it will be replaced with a 7-inch IPS display with 1024 X 600 resolution. That screen will be capable of viewing high-quality photos (newspapers and magazines should look good) and video. There’s always a trade off though, as you’ll only get about 8 hours of usage out of this compared to the month of life you get with the Amazon Kindle.

The Nook Color will also come with Pandora preloaded and it will have Facebook integration as well. The company will also be opening up an app store to third-party developers and it has introduced a software development kit.

Even though it’s Android-powered, the Nook Color won’t be able to access the more than 100,000 apps in the Android Market. Barnes & Noble did say that it will be relatively simple to port over apps to its e-reader.

The Nook Color will also come with WiFi (including 802.11n) but no 3G. There will also be a microSD slot, 8 GB of internal storage and it will ship on Nov. 19.

It’s really an interesting device and the price is actually pretty decent for what you’re getting. We have to wonder how Amazon will respond though.

We’ve heard rumors that Amazon will unveil an Android app store and it will also create a tablet to complement it. I wouldn’t be surprised to see this now.

If you're sporting an Android phone with version 2.1 on it, you may have been a little annoyed that the...